Nazriya Nazim Fahadh took to Instagram recently and posted an adorable picture with her best friend Amal Sufiya. Read on to know more about the Instagram photo.

Actor Nazriya Nazim Fahadh, Malayalam actor Fahadh Faasil's wife is quite active on Instagram and frequently gives glimpses of her personal life on the social networking site. Nazriya is very close to Dulquer Salmaan's wife Amal Sufiya and recently shared an adorable picture with her. Read on to know more about Nazriya Nazim Fahadh's Instagram post.

Nazriya Fahadh's Instagram is full of pictures with her loved ones, including her husband, actor Fahadh Faasil, her close friends and family. She took to Instagram and posted a picture with her best friend Amal Sufiya, who is  Dulquer Salmaan's wife. The two best friends can be seen posing for a series of selfies, smiling and pouting away. Nazriya captioned the picture, "Sister ðŸ‘¯‍â™€ï¸ My AMA ðŸ˜˜ðŸ¤ðŸ¤". While Amal could be seen wearing a floral shirt with her brown hair kept open, Nazriya donned a quirky printed shirt with pictures of dogs on it. You can see her Instagram post here.

Nazriya enjoys a huge following of 3 million people on Instagram and her post with her best friend Amal received more than 250k likes within an hour of posting it. Her fans and followers bombarded the comments section with heart, fire, and heart-eyed emojis. While one follower called them cuties, another said that the two looked amazing. You can see some of the comments here. 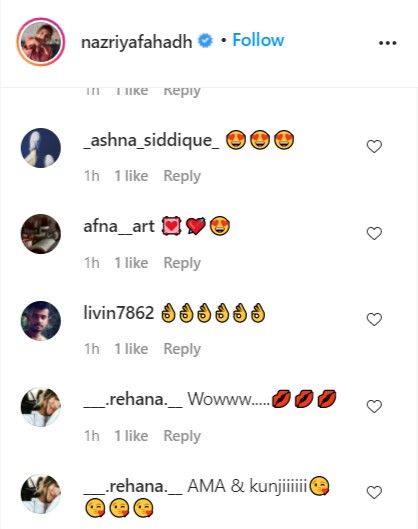 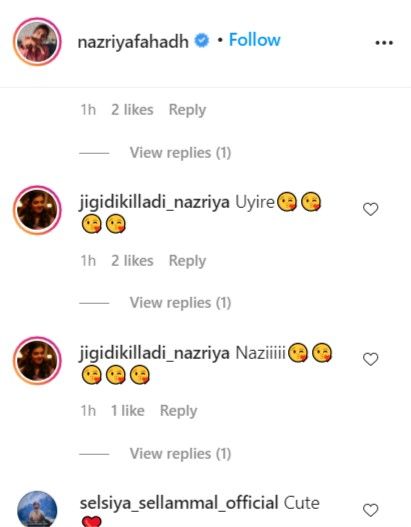 Nazriya's love for animals and pets is very evident through her Instagram posts.  She can be seen in quite a few posts that show her pet dog Oreo posing with the actor. In her recent post, she revealed a few more of their pictures together, where both Nazriya and her dog can be seen cuddling and dancing with each other. She wrote in the caption of the post, “#mine”.

Nazriya Nazim started her acting career as a child artist in the Malayalam film Palunku that was released in 2006. She has since appeared in a number of Malayalam films, along with some Tamil and Telugu films as well. Some of her works include Oru Naal Varum, Maad Dad, Ohm Shanthi Oshaana, Thirumanam Enum Nikkah, among others. She has also worked in television shows like Shruthilayam and Star Singer. She will be next seen in the Telugu film titled  Ante Sundaraniki.