The SIIMA Award-winning actor Kriti Kharbanda entered her thirties and she rang in her 30th birthday today, i.e. October 29, 2020. Thus, to celebrate Kriti's birthday, a lot of her Bollywood, Tollywood and Sandalwood peers took to social media to extend heartfelt wishes to the Housefull 4 actor. Joining the bandwagon now, Telugu actor Samantha Akkineni who shared a sweet birthday post on Instagram for Kharbanda.

A post shared by Samantha Akkineni (@samantharuthprabhuoffl) on Oct 2, 2020 at 8:53pm PDT

Earlier today, Kriti Kharbanda's Tollywood contemporary Samantha Akkineni took to her Instagram handle to wish the Pagalpanti actor on her 30th birthday. Samantha shared a picture of Kriti as Arfa from the sets of her newly-released Zee5 original Taish on her Instagram story to wish her a 'Happy Birthday'. Sharing Kriti's candid picture, the Majili actor wrote, "Happy Birthday Gorgeous @kriti.kharbanda" followed by a red-heart emoticon. 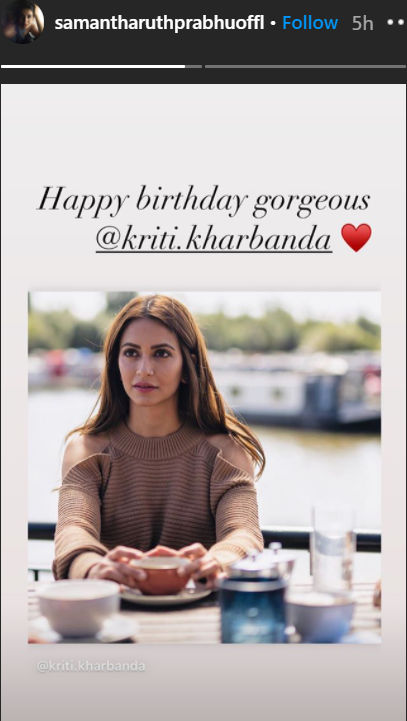 Meanwhile, on Kriti Kharbanda's birthday, her highly-anticipated revenge drama titled Taish premiered on the OTT streaming platform, Zee5. Taish was released as a feature film as well as a six-episode series simultaneously on the platform today. The web-series boasts of an ensemble cast including Jim Sarbh, Harshvardhan Rane, Zoa Morani, Sanjeeda Sheikh, Kriti Kharbanda and Pulkit Samrat in the lead roles. Although her real-life love interest Pulkit is a part of this Bejoy Nambiar directorial, Padmaavat actor Jim Sarbh plays the reel-life love interest of Kriti in Taish.

The couple will be seen sharing the screen space after Anees Bazmee's Pagalpanti, which released last year. However, in a recent interview with Bollywood Hungama, Kriti revealed that she wasn't aware that her beau had also signed Taish. She also stated that she came to know about the same when Pulkit told her he had signed for the Zee5 Original.

Meanwhile, as the revenge drama premiered on the platform today, Twitterati has shared their review of the Bejoy Nambiar directorial on the micro-blogging platform. The film-cum-series has been garnering a lot of appreciation from the masses online, especially Harshvardhan Rane. Netizens have showered the Sanam Teri Kasam actor with heaps of praise for his exemplary performance in Taish.

Check out netizens' reaction to 'Taish' below

@harsha_actor gotta be the sweetest actor I've seen in recent times. Love the way he's interacting with his fans, despite the fact that he's still recovering from Corona.
Can't stop admiring!! ðŸ˜ðŸ’“

#Taish - This could also be a unique thing, when a real life couple is not paired on reel. @PulkitSamrat and @kriti_official-You are adorable together and share some great chemistry offscreen. Would love to see how it pans out here, considering you are not a couple in the film â¤ï¸ pic.twitter.com/VxGdlntRrb