Actor Prabhas announced on Instagram that he will be dropping a sweet surprise regarding his film 'Radhe Shyam' on February 14, Valentine's day. Read for more.

Prabhas and Pooja Hegde starrer Radhe Shyam is all set to release later this year. The team of Radhe Shyam managed to create a frenzy amongst the actor's fans and have now dropped a sweet surprise for them. The romantic drama film will be releasing its teaser on February 14th, 2021. Actor Prabhas shared this news on his official Instagram handle, check out the post below.

Prabhas to release the trailer of Radhe Shyam on Valentines

Prabhas released the post of Radhe Shyam and also shared his first look from the film. The actor is seen dressed in a casual outfit in the poster and is seen sporting striped black and white pants, paired with a light brown sweatshirt. Radhe Shyam poster also gives viewers a glimpse of the time, where the movie is set. The maple leaves falling over the actor gives us a vintage vibe and we can surely expect a romantic drama film soon.

Also Read: Prabhas' Gift To The 'Radhe Shyam' Unit Will Make Fans Fall In Love With Him Even More 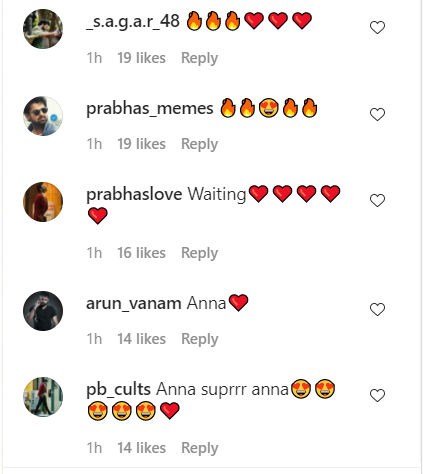 Along with the picture, Prabhas mentioned in the caption, "See you all on Valentine’s Day for a glimpse of #RadheShyam" (sic). Prabhas' fans on Instagram flocked the comment section and expressed their views. Many wrote they were eagerly waiting for the announcement while several others sent him virtual love and kisses.

Actor Prabhas will be seen in the character of Vikramaditya in the film while Pooja Hegde will be seen as Prerna. The other Radhe Shyam cast includes actors Krishnam Raju, Sachin Khedekar, Priyadarshi Pulikonda and Bhagyashree. The film is simultaneously shot in Telugu and Hindi languages. Directed by Radha Krishna Kumar, Radhe Shyam plot revolves around a period love story that is against the backdrop of Europe.

Actor Prabhas will essay the role of a fortune teller and Pooja Hegde is rumoured to play the role of a princess. The film was announced back in 2019 and will be released nearly after 2 years. Apart from Radhe Shyamm, actor Prabhas will also be seen in films Salaar and Adipurush. Prabhas' film Salaar is an action thriller film directed by Prashanth Neel of KGF fame.