Southern superstar Prithviraj Sukumaran’s wife Supriya Menon Prithviraj recently took to her Instagram handle and gave a sneak peek into their fun weekend. She shared a picture of the actor with their daughter playing in the seawater. Calling Prithviraj and his daughter Ally, ‘water baby’, Supriya wrote, “Sunday Funday”. Take a look at the Instagram picture below.

In this picture shared by Prithviraj’s wife, one can see the actor along with his daughter Alankrita Menon Prithviraj. While Prithviraj stunned in a casual black tee paired with blue shorts, Ally wore a floral print swimsuit. The star also wore a black mask for safety measures. Going by the caption, the Mollywood family spent their Sunday at the Arabian Sea. Supriya Menon Prithviraj’s caption simply read as, “Sunday Funday #ArabianSea #Daada & Ally #WaterBaby”. Prithviraj has also reposted the post on his official Instagram handle.

Several fans and netizens have reacted to the adorable picture. Many followers dropped hearts and kiss emojis in the comment section. Some fans’ reactions include, “Nice pic”, “looks good”, “spark” and many others. Check out some more comments below. 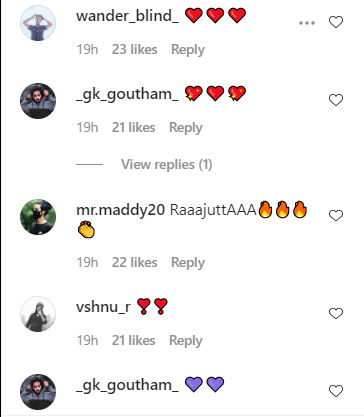 On the social front, Prithviraj is quite active on Instagram. He recently shared a late-night post on Instagram wherein, he gave a sneak peek into his movie session with his wife. He posted a screengrab from one of his favourite movies, Michael Madan Kama Rajan featuring Kamal Haasan and Urvasi. In the caption, the actor praised Kamal Haasan and Urvashi’s work. He also expressed his love for the film. His Instagram photo featured the leading stars of the film romancing. Check out Prithviraj Sukumaran’s latest picture on social media.

Very very few films make you happier than #MichaelMadanKamaRajan @ikamalhaasan is one of world cinema’s greatest and #Urvashi chechi is a legend! Late night revisit of an all time classic with wifey @supriyamenonprithviraj ðŸ˜Šâ¤ï¸

On the work front, Prithviraj was last seen in Ayyappanum Koshiyum. This is an action thriller starring Prithviraj Sukumaran and Biju Menon in the title roles. Released on February 7, 2020, the film grossed around â‚¹52 crores worldwide. For his next, the actor is shooting for Aadujeevitham. This is a drama flick helmed and written by Blessy.

Also Read | Prithviraj Sukumaran has made memorable cameo appearance in these films; watch