Actor Prithviraj Sukumaran's quirky birthday cake, designed by wifey, contains an 'Aadujeevitham' reference and fans are loving it. Have a look at the picture.

Actor Prithviraj Sukumaran has been celebrating his 38th birthday with an intimate ceremony on October 16, 2020. On this special occasion, the actor took to Instagram to share a picture of the customised cake which had been designed by his wife, Supriya Menon Prithviraj. The cake also carried a close reference to his upcoming film, Aadujeevitham. His fans have taken over the comments section as they drop heartfelt messages for the actor.

Actor Prithviraj Sukumaran recently updated his fans with a picture of his 38th birthday cake. In the picture posted, a majestic green colour cake can be seen sitting on a white surface with a quirky and intricate decoration. The cake has been made by The Sugar Sifter and has an oval tag on top, which says, “Happy Birthday Daada”. It has been entirely kept green with a structure of a white goat head attached in the middle. The details on the animal head add beauty to this cake. The goat reference on the cake is related to Prithviraj’s upcoming film, Aadujeevitham.

In the caption for the post, actor Prithviraj has indicated that only a few people will understand the reference made through the cake. He has also added a ‘goat’ emoticon and a red heart along with a hashtag that reads, ‘Nabeel’. Have a look at the post on Prithviraj Sukumaran’s Instagram here.

#Nabeel ðŸ˜ƒ If you know you know! â¤ï¸ðŸ

In the comments section of the post, fans have wished the actor a happy birthday along with heartfelt messages. A bunch of them have spoken about the cake while others used emoticons to express themselves better. Have a look at a bunch of comments here. 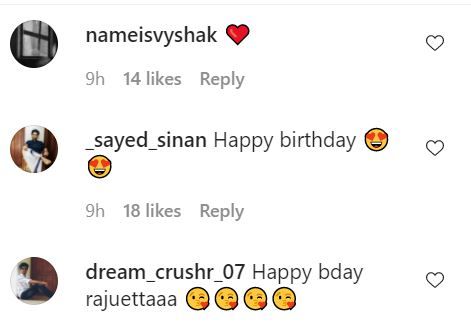 Read Prithviraj Sukumaran's Birthday: Prove You're True Fan Of The Actor By Taking This Quiz

The official Facebook page of The Sugar Sifter also revealed details about the cake that was created for Prithviraj’s birthday. They have wished the actor a happy birthday while speaking about the design, which is by Supriya Menon Prithviraj. They thanked their followers and also mentioned through the hashtags that reference is from the film Aadujeevitham.

Aadujeevitham is an upcoming biography film based on the life of Najeeb Muhammad, who was an Indian migrant worker who went through various hurdles in life. The film has been directed by Blessy and is based on a novel by Benyamin. It stars actors like Prithviraj Sukumaran and Amala Paul in key roles.