R Madhavan recently took to his Instagram handle and shared the link to his new song lyric video from his upcoming movie, Maara. Check it out.

R Madhavan is all set for his upcoming Tamil movie named Maara as he shared a link to the recently launched song lyric video on his Instagram handle. In a span of a few hours, R Madhavan's Instagram post received more than 89k likes. Take a look at the actor's post and how fans reacted to it.

R Madhavan recently shared the details about the new song from his upcoming movie, Maara. The actor took to his Instagram handle to share his amazing look from his new movie. He can be seen sporting a salt and pepper beard with hair that is messily set back. He can be seen spotted wearing a plain shirt over a t-shirt with a paintbrush in hand. R Madhavan seems to be focusing elsewhere as he is not looking into the camera.

All his fans became excited the moment his new song video came online. They took to the comments section to shower their love on their favourite actor. Many called the actor awesome and charming while others just expressed their love for him through emojis. Here’s what some of the fans commented on R Madhavan’s Instagram post. 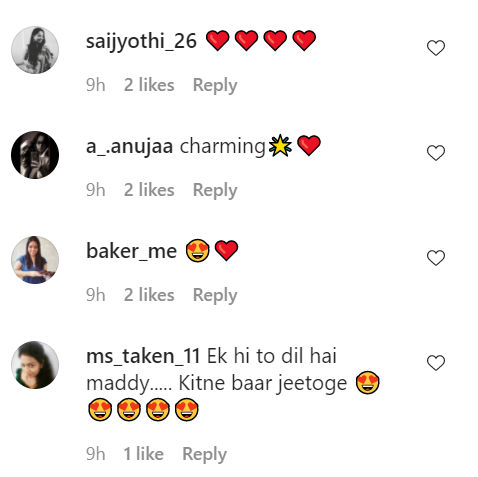 Recently, R Madhavan shared a beautiful post about one of his movies, Rehnaa Hai Terre Dil Mein, as it completed 19 years. Another one of R Madhavan's films, Minnale, also completed 20 years. He shared in his Instagram post how it has been 19 years of unprecedented love and recognition from around the world and way beyond his wildest dreams. He thanked all his fans for the affection they gave and stated how eternally grateful he was. He also stated that he did not know whether the team of Rehnaa Hai Terre Dil Mein deserves all this love or not but he is thankful for it. He also stated that they will wish to live forever in the hearts of their fans. His fans also became emotional and responded to his heartwarming post with love.