Tollywood superstar Rana Daggubati broke millions of hearts across the country after he finally revealed his engagement with his lady love Miheeka Bajaj on social media. By sharing an intimate photograph with his longtime girlfriend across all social media platforms, Daggubati captioned the posts, "She said yes #MiheekaBajaj". Although the news took everyone by surprise, the Bahubali actor's friends and family reportedly knew about their romance.

Also Read | Who Is Rana Daggubati's Girlfriend Miheeka Bajaj? Here's All We Know About Her

A source told a daily that Rana Daggubati virtually proposed to his sweetheart Miheeka Bajaj amid the nationwide lockdown after they had been in a serious relationship for a while. The source also revealed Miheeka is an interior designer and an event manager too. However, no official engagement of the couple has taken place due to the on-going crisis as of yet, said the source.

The lovebirds also believed in keeping their relationship closely guarded as only their common friends and family knew about their togetherness. Elaborating more about the same, the source further revealed that Miheeka Bajaj also never visited her beau on sets and thus, the paparazzi had no clue that they were dating for a while, because it was strictly under wraps. The source also spilled the beans about their marriage plans as he stated that the power couple will only tie the knot after everything returns to normalcy.

Soon after Rana Daggubati made his relationship official, congratulatory wishes from contemporaries and fans started pouring in on social media. From Bollywood megastar Anil Kapoor to Tollywood A-lister Dulquer Salman, a lot of celebrities from the showbiz expressed their excitement and gave their best wishes to the couple in the comment section of the post. Check out some of the wishes from celebrities below: 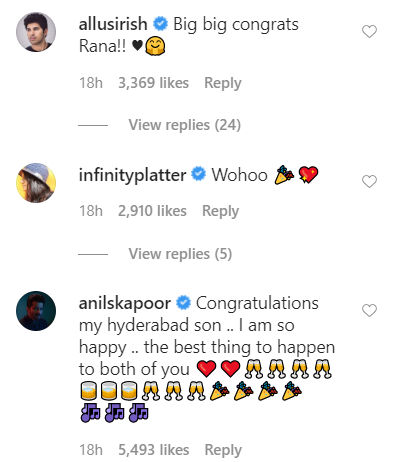 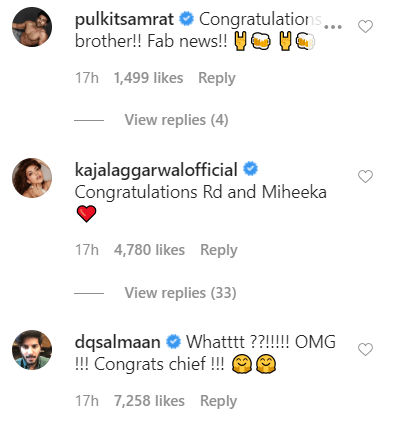 On the career front, Rana Daggubati will be seen in Haathi Mere Sathi which was originally meant to release at the box office on April 2, 2020. However, due to the Coronavirus pandemic, the release of the film has been pushed by the makers. The film will also release in Tamil by the title Kaadan and in Telegu by the title Aranya.

Also Read | Rana Daggubati Remembers 'the Learning And Joy' During The Making Of Baahubali 2; See Pics