Many celebrities congratulated Rana Daggubati and Miheeka after the Baahubali star shared pics of his official Roka ceremony on his social media handle today.

Actor Rana Daggubati took to his social media account and announced the news about his official engagement ceremony. The actor shared pictures with his fiancee Miheeka Bajaj as the two were all smiles for the camera. Numerous fans and celebrities flocked to the post and poured their hearts out for the couple and sent them regards as they congratulated them.

From Rashmika Mandanna to Anil Kapoor, all popular celebrities congratulated the couple on their engagement ceremony. This includes Siva Kartikeyan, who is a popular actor in the Tamil film industry. He shares a strong bond with Rana Daggubati. Check out the tweets below.

Rashmika Mandanna is a popular South Indian actor. She has done several movies in the Telugu film industry. The actor was reportedly to share the big screen with Rana Daggubati in an upcoming film. 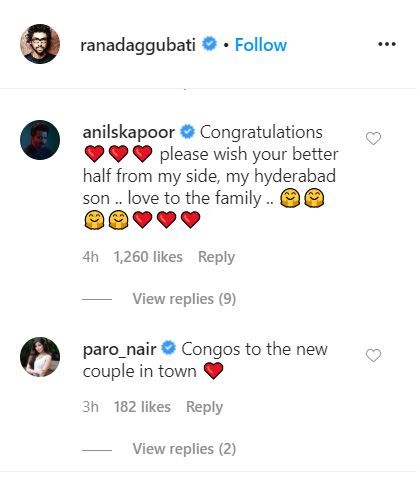 Baahubali co-star Anushka Shetty, too, congratulated the couple. Apart from her, Malayalam superstar Dulquer Salmaan too wished the couple. They left comments on Rana's Instagram post. 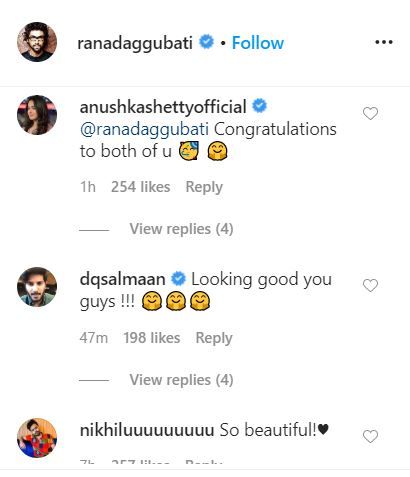 Apart from these, many other famous people like Saina Nehwal, Sudheer Babu, Ajit Andhare, ad Shruti Haasan also congratulated the couple. The majority of people expressed how good Miheeka and Rana looked together. They all sent their loving wishes to the couple.

Huge congratulations to both of u ... May you both be blessed with lifelong happiness â˜ºï¸â˜ºï¸ 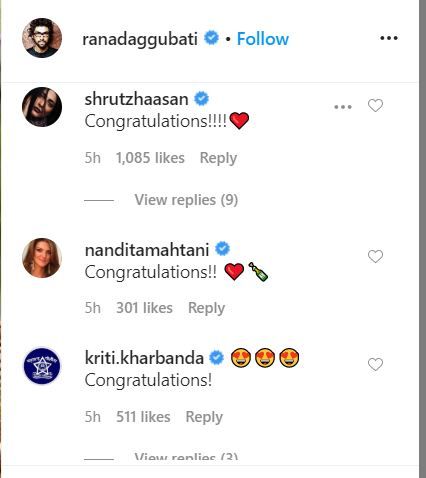 The ceremony that took place today seemed to be an intimate one. Rana was seen wearing a white shirt and traditional dhoti. Miheeka, on the other hand, was clad in a silk saree.

Rana had earlier shared post, during the lockdown, where he had proposed to his longtime girlfriend. In the post he had written, “She said yes”. The post had surprised fans as Rana had always kept his relationship under wraps.

Rana Daggubati's father reveals when the wedding might happen

In an interview with a media portal, Rana Daggubati’s father revealed that the wedding is likely to take place this year itself. He said that it might happen in December or even before that. Rana’s father told a media portal that today was the meeting of the parents, as per the Telugu customs.