'It's Official!': Rana Daggubati Gets Engaged To Miheeka Bajaj Amid Lockdown; See Pics

Rana Daggubati shared a picture with Miheeka Bajaj and revealed that the two have gotten engaged amid lockdown. Read on to know more details.

Actor Rana Daggubati and Miheeka Bajaj are officially engaged now. The Bahubali actor revealed the news in his latest Instagram post where he posted a picture with Miheeka Bajaj. The actor wrote in his caption, “And it’s official!!”

In the photo shared by the actor, Rana can be seen sitting next to Miheeka in what seems like a small engagement ceremony. The former is dressed in a white shirt and a white traditional dhoti. Miheeka looks gorgeous clad in a silk saree. She is all dressed up with her hair and makeup on point. 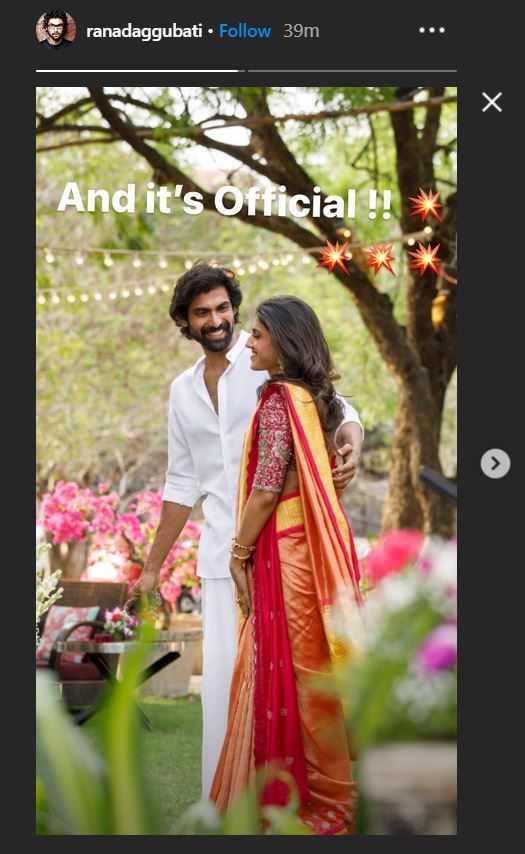 The actor had always kept his personal relationships under wraps and spilled the beans only when the two got engaged. A few days ago, Rana Daggubati had surprised fans and celebrities alike when he had posted a picture with Miheeka. In that post, he had shared the news as he wrote in the caption, “she said yes”.

As soon as Rana Daggubati shared the latest picture of his engagement ceremony, fans flooded it with their comments. Numerous fans congratulated the actor and his fiancée. There were some fans who showered the actor with love and affection in the comments. There were several fans who commented on how perfect Rana and Miheeka looked together and sent them heart-warming wishes. Check out some fan comments below. 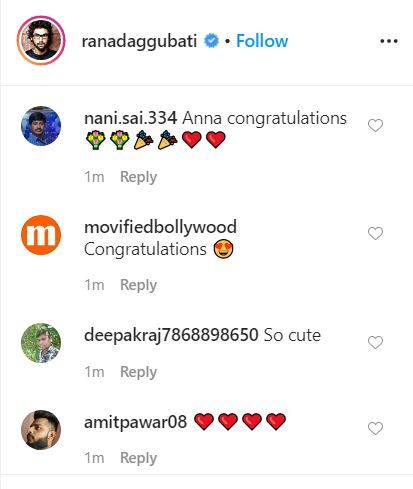 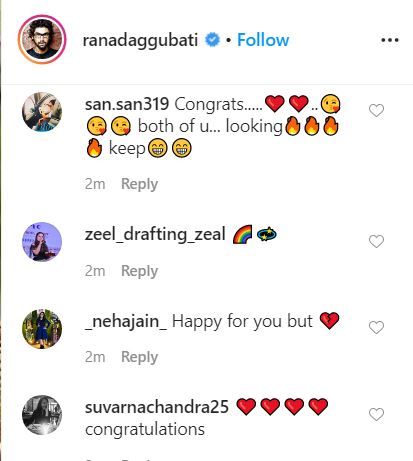 Read Also | Will Comet Swan Be Visible From India? Details & Images Of The Green Comet Inside

According to leading media portals, Miheeka Bajaj was born and raised in the city of Hyderabad. She is the founder of event management and interior design company, Dew Drop Design Studio. Miheeka is an interior decorator as well and has pursued a graduate degree from Chelsea University. She is friends with Sonam Kapoor and many other celebrities. On the announcement of her engagement with Rana, Sonam Kapoor had congratulated the duo on her social media account.

What is next for Rana on the work front?

On the work front, Rana Daggubati was last seen in Housefull 4 and NTR. He had also directed Enai Noki Paayum Thota. According to reports in media portals, the actor will be seen next in Haathi Mere Saathi as Bandev. Apart from these, the actor is, reportedly to be seen in two other movies in the near future. Reportedly, he will be seen in Hiranya Kashyapa and Virata Parvam.

Read Also | Urvashi Rautela Shares A Portrait Of Herself; Says 'I’m Not Adding 2020 To My Age'

PEOPLE HAVE PLEDGED SO FAR
LATEST NEWS
View all
17 hours ago
Rana daggubati feels he found the strangest time to get married to fiancee miheeka bajaj
16 hours ago
Dhanush's 'pudhupettai' trends on twitter as it completes 14 years at the box office
13 hours ago
Mammootty's upcoming political-thriller 'one' will not have an ott release, confirm makers
12 hours ago
Dulquer salmaan expresses his condolences to tovino thomas as his film set gets vandalised
11 hours ago
Jyotika talks about challenges during 'ponmagal vandhal', says she had to "mug up" tamil