Rana Daggubati shares a new poster of his upcoming flick Viraataparvam. Sai Pallavi can be seen holding Rana's hands in the picture. Have a look.

On January 13, 2021, Rana Daggubati took to his official Instagram handle and shared a poster of his upcoming flick Viraataparvam. In the film, he is starring opposite South diva Sai Pallavi and the film will be releasing this summer 2021. While sharing the new poster, Rana wished his fans "Happy Makar Sankranti" and also updated that his film Viraataparvam has moved into post-production stage.

Rana Daggubati shares a new poster of his upcoming flick

In the picture, Rana can be seen dressed up as a Naxalite while Sai Pallavi looks beautiful in a simple red saree and yellow blouse. The poster gives the glimpse of the duo’s love story as Sai can be seen holding Rana’s hand. In the caption, Rana wrote, “Happy Sankranthi everyone!! ‘#Viraataparvam’ moves into post-production and will be in cinemas this summer!!”

Also read: Rana Daggubati Quiz: Find Out How Well You Know The 'Baahubali' Actor And His Movies

As soon as the picture was uploaded, many of his fans expressed their excitement in the comments section. A fan commented, “Love love love. My lovely rana. Always in support of u” with a red heart. 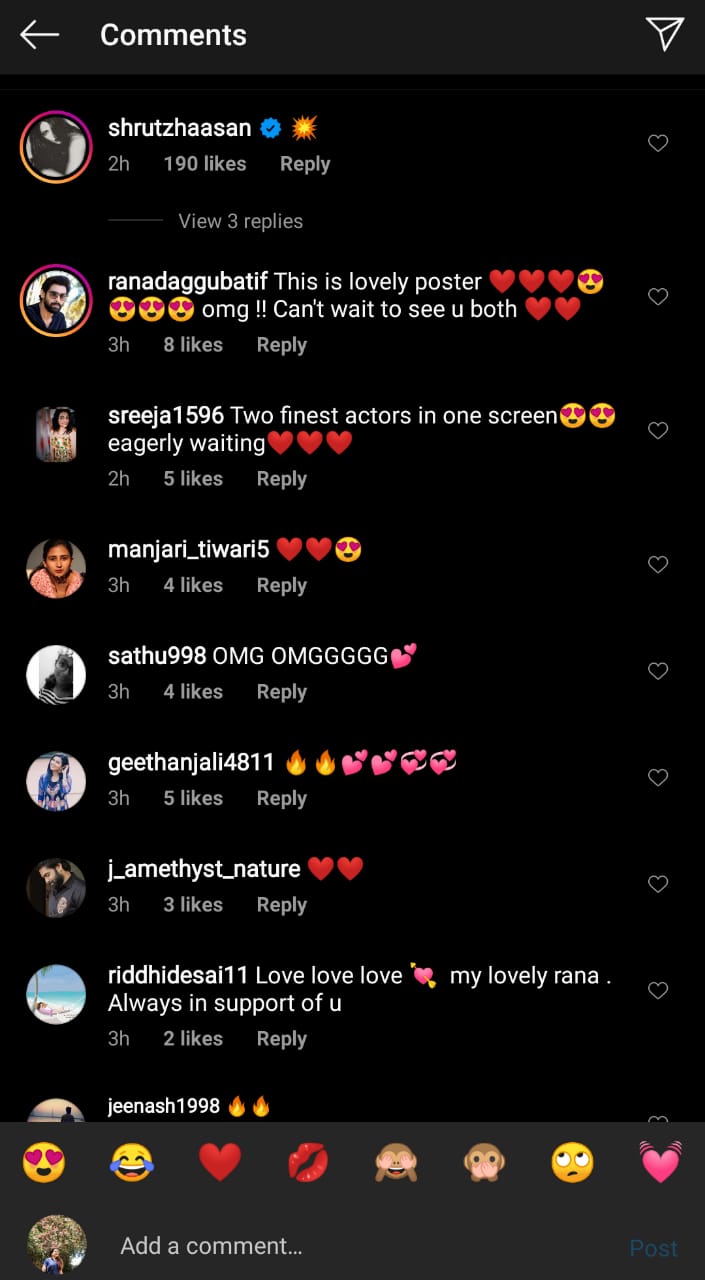 The Babubali star also shared the poster on his Twitter handle along with the same caption. Many fans and followers wished the actor while several others expressed their love in the comments section. Have a look at the tweets.

She's your pair in this movie And we have to see her as pks wife in ayyappana koshayam remake.. ðŸ˜‚ðŸ˜‚ meme makerski manchi stuff.. ikkada naxalite gf ga.. akkada ex naxalite gaðŸ˜‚

Rana bhiya happy sankranti and happy pongal to you and your family and to all my brother's.

You are looking dam cool sir in this poster ðŸ™

Directed by Venu Udugula, Viraataparvam is a historical drama which is produced by D Suresh Babu and Sudhakar Cherukuri. Alongside Rana and Sai, the film will also feature Tabu, Priyamani, Nandita Das, Naveen Chandra, Eswari Rao and Zareena Wahab in supporting roles. The musical score has been composed by Suresh Bobbili. The plot revolves around the Naxalite movement that took place in Telangana region of Hyderabad in the 1990s. Rana will be seen playing Dr Ravi Shankar, aka Comrade Ravanna.

Image Source: A still from Viraataparvam

Also read: Rana Daggubati, Pawan Kalyan To Feature In 'Production No 12', Filming To Begin In January