The Telugu movie star has been in the news lately for his eye-catching social media posts. Here is what Rana Daggubati’s social media looked like this week.

Rana Daggubati is a well-known Indian actor. The Telugu movie star has been in the news lately for his eye-catching social media posts. Here is what Rana Daggubati’s social media looked like this week. Read ahead to know more-

Rana Daggubati took to his Instagram to share the poster of Viraata Parvam. In the caption, he wished actor Sai Pallavi, a very happy birthday. The actor called Sai his ‘co-star and comrade’. He also expressed his wish that the might of the pen and compelling stories always travel with her.

In the poster, one can see Sai Pallavi sitting in a plain red and green saree as she sits in front of what looks like a Naxal monument. As per a news source, Sai's role in the movie is that of a poor girl. Her character in the film goes through a painful and failed relationship. Her pain then takes her towards Naxalism and she turns into a Naxalite. In the bottom of the poster, one can see the words ‘Revolution is an act of love’. The letters ‘evol’ in Revolution are highlighted as they form the word love from right to left.

Rana Daggubati took to his social media to make another important official announcement. The Baahubali actor revealed that he will soon be tying the knot to Miheeka Bajaj. Rana Daggubati posted an adorable picture of himself along with his bride to be, Miheeka.

In the picture, the couple is sharing a sweet moment under the tree smiling for the camera. In the caption of the picture, Rana Daggubati revealed that Mihika Bajaj has said 'Yes' to him. The cute post captured everyone's attention. Rana Daggubati's fans and colleagues started congratulating the couple. Here is a look at some of the comments. 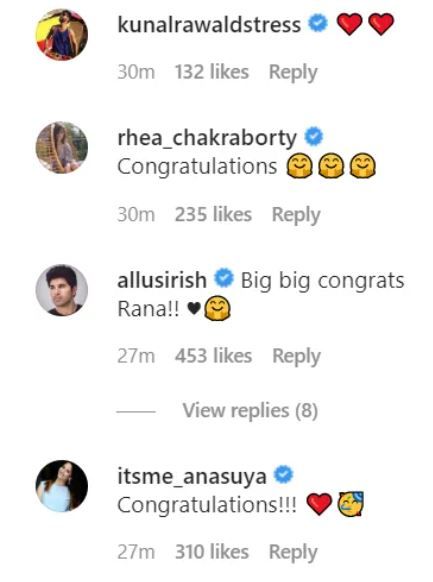 Also Read | Rana Daggubati To Get Married By The End Of This Year, Reveals Father Suresh Babu

Miheeka Bajaj is the daughter of jewellery designer Bunty and Suresh Bajaj. Miheeka Bajaj is the niece of producer and distributor Tolu Bajaj, who told a news daily that the engagement was a surprise to the family. Tolu Bajaj reportedly stated that he is very happy about the news. He went on to say that his brother has informed him about the engagement a few days back. Tolu Bajaj stated that they have known the Daggubati family for a long time, however, they weren’t familiar with the younger generations from the family. He concluded by saying that he is not aware of the date of Rana Daggubati and Miheeka Bajaj’s wedding.