Rashmika Mandanna played the question and answer game with fans on Instagram. When asked about her Bollywood debut, here's what 'Geetha Govindam' actor answered

Rashmika Mandanna's Bollywood debut reports are doing the rounds on the internet for quite some time now. The actor who has given the industry a slew of remarkable movies like Chamak, Geetha Govindam, Kirik Party amongst others, has been reportedly approached by Sanjay Leela Bhansali for her Bollywood debut. Ever since the news was out, fans have gushed to question Rashmika Mandanna about her B-wood debut. In a fun question and answer round on Instagram, the Sarileru Neekevvaru actor answered the same.

Also Read | Allu Arjun's 'Pushpa' to not have Rashmika Mandanna as his love interest? Details inside

On April 27, Mandanna decided to play the question and answer game with fans on social media. Rashmika Mandanna's Instagram was flooded with her followers dropping in different questions. Moreover, the actor was replying to most of their queries. Amidst the session, a fan asked Mandanna about her Bollywood debut. The question read, "Madam is there any planning to debut in Bollywood, big fan from Assam".

Interestingly, Rashmika Mandanna had the most twisty way to answer the question. The star attached a cute photo of herself, in which she was seen pouting. Moreover, she also added a GIF that popped up on her picture. The GIF read, "I guess". Rashmika hinted that she might make her Bollywood debut soon.

Also Read | Rashmika Mandanna tells fans 'Its okay to sleep all day, you're not alone' amid lockdown 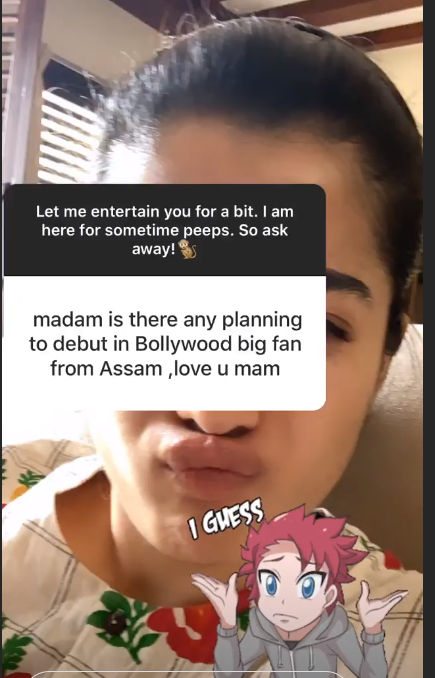 For the unversed, several reports state that Rashmika Mandanna is currently in talking terms with Sanjay Leela Bhansali but has not given her official call yet. The film is reported to be a mystery thriller with comic undertones. The untitled outing also has Randeep Hooda playing the role of a cop.

Mandanna is among the very few Tollywood actors to enter Rs 100 crore club. She made her acting debut in 2016 and ever since then, has not looked back. Within a span of four years, Rashmika Mandanna has won a million hearts with her indelible on-screen performances. Her movie Geetha Govindam, opposite Vijay Deverakonda, is touted to be one of the all-time highest-grossing movies in the history of Telugu cinema fraternity.