Love Story is an upcoming Telugu romantic drama film starring Naga Chaitanya and Sai Pallavi in the lead roles. The film is slated to release on April 16. After the release of Love Story's song Nee Chitram Choosi which received a lot of love, a new lyrical video song named Saranga Dariya will be out on February 28. The second song will be released by Samantha Akkineni. Ahead of the launch, Sai Pallavi called Samantha Akkineni 'sweetest' in her latest Twitter post.

Also read: Sai Pallavi Has A Huge Fan Following In The Middle East Too, Did You Know?

Sai Pallavi calls Samantha Akkineni the sweetest in a tweet

Sai Pallavi took to Twitter and shared a poster of the film that featured herself. In the poster, she was seen wearing a green and orange saree. She was seen touching her feet and had a smile on her face. Sai Pallavi captioned her post by saying, “The sweetest Samantha Garu will be releasing the lyrical video of Saranga Dariya on the 28th of Feb @Samanthaprabhu2 @chay_akkineni @sekharkammula @pawanch19.” Fans seem highly intrigued about the release of the song as they rushed to the comments section to express their excitement. Take a look below. 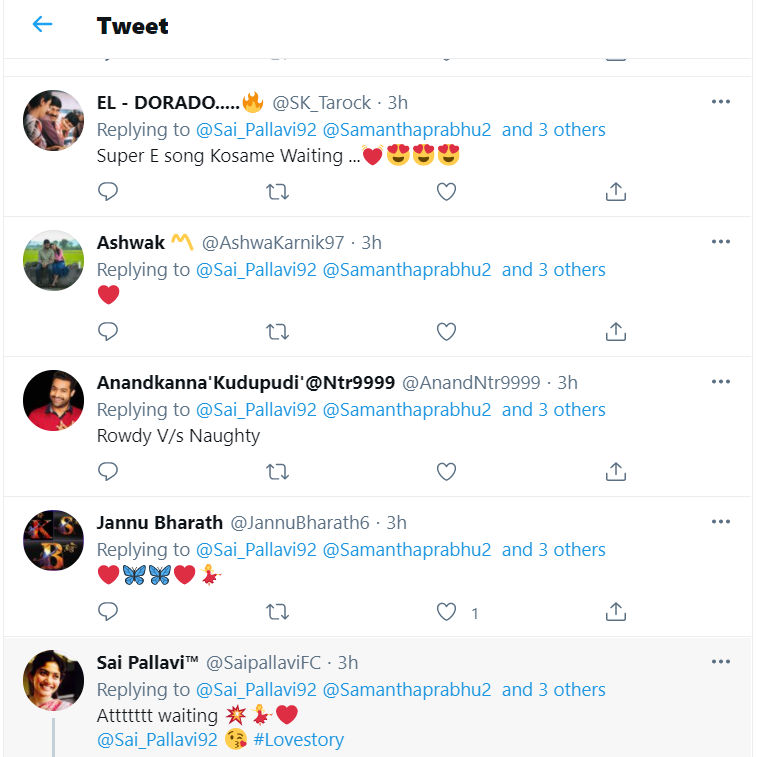 The film is film written and directed by Sekhar Kammula. This is for the first time that Sai Pallavi and Naga Chaitanya will be seen sharing the screen space. Their chemistry in the teasers and posters has already piqued audiences' interest. Love Story marks Sai Pallavi's reunion with filmmaker Sekhar Kammula after Fidaa. The film is bankrolled by Narayan Das K Narang and Puskur Ram Mohan Rao under their banners Amigos Creations and Sree Venkateswara Cinemas. Production and release of the film were delayed due to the pandemic.

Also read: From Love Story To Viraata Parvam: A Look At Sai Pallavi Movies That Will Release In 2021

Sai Pallavi gained recognition after her role in the 2015 Malayalam film Premam. Later, she appeared in films such as Kali alongside Dulquer Salmaan, Fidaa, co-starring with Varun Tej and Diya, directed by Vijay. She will soon be seen in upcoming films such as Viraata Parvam and Shyam Singha Roy apart from Love Story.

Samantha Akkineni has established her career in the Telugu and Tamil film industries. She is known for films such as Super Deluxe, Majili, Oh! Baby, Jaanu and many more. Samantha will soon be seen in upcoming films such as Shaakuntalam and Kaathu Vaakula Rendu Kadhal. She is making her Bollywood debut with season two of the web series The Family Man.