Samantha Akkineni allegedly took a dig at Pooja Hedge in a leaked chat after the latter's Instagram was 'hacked' as their fans indulged in a 'war' online.

Did Pooja Hedge take a dig at Samantha Akkineni? Did the latter hit back by joking with her celebrity friends? The truth is not clear yet, but their fans are currently into a ‘war’ on social media, defending their favourite star and slamming the other actress.

It all started when Pooja Hedge’s Instagram account posted a photo of Samantha Akkineni on her stories and captioned it, “I don’t find her pretty at all.”

Prettyness is not only in skin it's should be from heart too...@Samanthaprabhu2 has it a lot,even the hackers posted it from ur insta u must at least say an apology to her bcz its came out fm ur insta and it would show how pretty u are. #PoojaMustApologizeSamantha #PoojaHegde pic.twitter.com/Lpiq9f1yq3

Moments later, the Housefull 4 star announced on social media that her account was hacked, and after help from her digital team, it was restored. 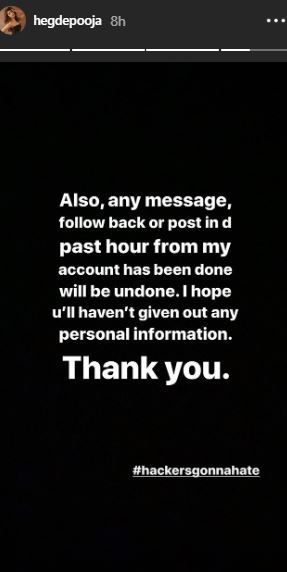 The incident did not go down with Samantha Akkineni fans, and within no time #PoojaApologizeSamantha trended on Twitter. Pooja Hegde fans were not those to keep quiet and they trended #WeSupportPoojaHegde.

Amid the fans going at each other, an alleged chat of Samantha, Chinmayi Sripaada, and a media personality went viral. In the chat that allegedly took place in the comments on the media personality's Instagram post and which has been deleted now, the participants are joking around the word ‘hack’, like ‘what the hack’, which makes Samantha term it ‘evil.

Chinmayi quips that her account isn’t it hacked. Samantha then wrote that all jokes on hacking are suspended till further notice. The actor then stated that it was a ‘sensitive topic’ for those who were or were not hacked.

Without knowing the real reason,how could u guys form a group and pass sarcasm on one.Ok...now what this doesn't come under ur so called "feminism" #WeSupportPoojaHegde pic.twitter.com/J4uh7nmQBw

Chinmayi also sparked a row by tweeting #TeamSamantha during this. As netizens asked her if the screenshot going viral was fake, she gave cryptic responses.

It wasn’t hacked then too :) so I kinda know it when I see it.

Enough people create fake screenshots. I cant be responding to everything no. Let the toxic have their day :)

However, the singer also said that she was ‘angry’ to the ‘appearance shaming’ and ‘needn’t have joked', allegedly over the viral chat. She also didn’t mind when a fan said she had ‘lost respect’ for her after reading the screenshots.

Fair ask. I neednt have joked. But I don't think I take to appearance shaming kindly and I was angry.

I am glad you did ðŸ™