Thala Ajith's adorable picture with wife Shalini recently went viral and fans are loving every part of it. Have a look at the picture with all details here. 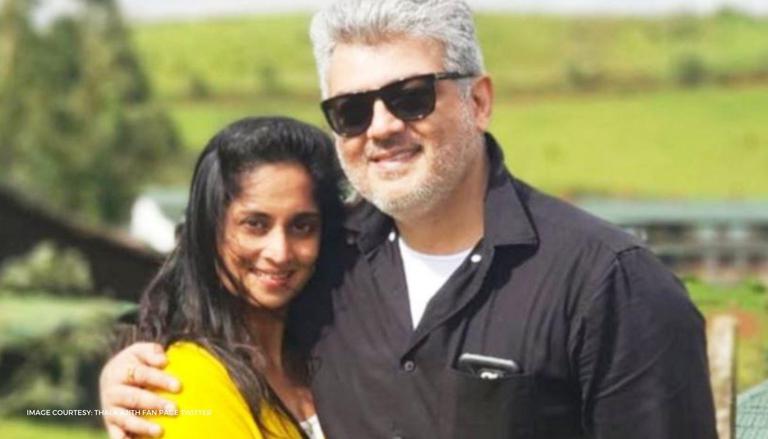 A picture of fan-favourite actor Thala Ajith has lately been taking the internet by storm as fans are loving a short glimpse into his personal life. He can be seen posing with his wife Shalini, who is also a renowned face in the Tamil and Malayalam film industries. The two actors have been married since the year 2000 and have been setting major couple goals ever since. In the picture, the two can be seen posing for the camera while embracing each other affectionately. This picture is being vividly shared by the fans as they love the chemistry and the sweet bond between the two artists.

An adorable picture of Thala Ajith and his wife Shalini is lately being shared across social media platforms. In the picture going viral, the two love birds are seen posing for the cameras in front of an open green field. They are seen hugging each other delightfully while wearing a sweet smile across their faces.

Shalini is seen wearing a protective yellow top which comes with a white neckline. The bright sweater stands in contrast with the background, making her stand out in the picture. Her hair can be seen flowing with the wind while she is holding a pair of shades in her hands. Thala Ajith, on the other hand, is seen wearing a simple black shirt which has been paired with a white inner. He is also seen wearing a pair of black shades which look great with the outfit. In the caption for the post, the fan page has mentioned that this picture is currently trending as fans are sharing it vigorously. Have a look at the post here.