Actress Aashka Goradia is a fitness enthusiast. She is a yoga lover and this is all over her Instagram. Recently, she shared a new picture with her husband.

Actress Aashka Goradia is a fitness enthusiast. She is a yoga lover and gives major fitness goals to her fans. Recently, she took to her Instagram to share a picture with her husband, Brent Goble. The picture shows the couple enjoying their yoga session. Have a look at her post below.

In the post, the couple can be seen performing a yoga pose. Looks like the picture is shot on the beach where Brent is lying on the sand while holding Aashka with his legs up in the air. He holds Aashka upside down and their faces meet. Brent can be seen in blue track pants whereas Aaksha can be seen in white sportswear. The actress flaunts her abs and looks all happy in the picture. She captioned her post in Hindi with the lyrics of the song Tera Saath Hai Kitna Pyara by Sapna Mukherjee, Kishore Kumar. She also mentioned that the picture was clicked by the photographer Eli Smitt. Fans couldn’t stop gushing over her posts and loaded it with comments and likes in no time. 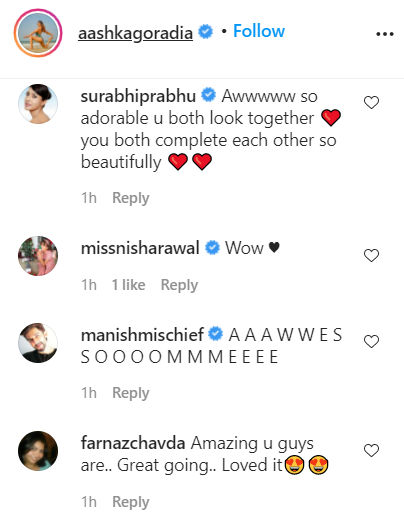 Earlier to this, Aashka shared another picture in which she can be seen sitting in the middle of the fields. She wore an Indo-western black outfit and added a pair of bronze earrings and a bindi to her look. She was seen holding her leg up while it touched her face. She captioned her post asking her leg to let her hug it. She also mentioned that one must start practising, moving and flowing as one’s body is capable of so many wonderful things. She also urged her fans to register for Peace of Blue Yoga, the yoga retreat centre in Goa. Peace of Blue Yoga is owned by her husband, Brent Goble.

Also read: Aashka Goradia Says 'it's The Breath, Not Just Strength' As She Practices Handstand 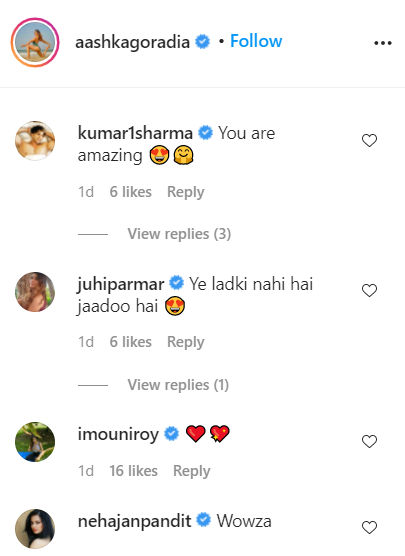 About Aashka and Brent -

Aashka Goradia dated television actor Rohit Bakshi before getting married to Brent Goble. She met Brent at an event in the US after her split with Rohit. She married Brent on December 1, 2017, following a Christian wedding ceremony. Brent is a weapons instructor and range safety officer in Las Vegas.