Taking to Instagram, Anusha Dandekar released her singing video a few hours ago. The video features her singing the soulful lyrics of Madison Beer. Watch

VJ Anusha Dandekar was recently spotted pursuing her hobby of singing by releasing her own version of Madison Beer’s Selfish. The actor took social media by storm with her singing prowess. Fans can see Anusha Dandekar using her time in lockdown productively amid the Coronavirus pandemic. The video uploaded by her left fans in splits who cannot stop praising Anusha for her melodious voice.

Taking to Instagram, Anusha Dandekar released her singing video a few hours ago. The video features her singing the soulful lyrics of Madison Beer. As the video progresses ahead fans can see Anusha Dandekar taking high notes like a pro. The Supermodel of the Year host left fans awestruck with her melodic voice.

Anusha Dandekar opted for a white ensemble for this. No makeup with wavy hair left open completed her look. Anusha Dandekar was seen thanking her virtual sound engineer, stylist. She also said how she couldn’t have released the video without her vocal coaches who are sisters Apeksha and Shibani Dandekar.

The diva also thanked everyone who encouraged her to sing. While posting the video, Anusha also disclosed that she was nervous to release the cover. As soon as the video surfaced on the internet, it was highly appreciated as they filled her comment section with praises. Here’s how fans are reacting: 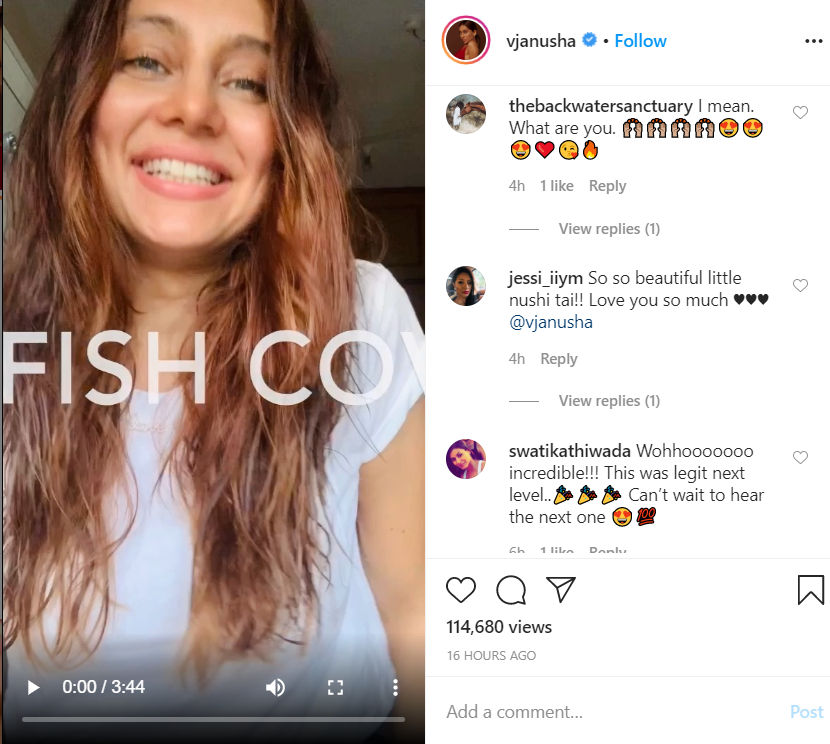 Selfish is one of the hit singles recorded by Madison Beer. It was released on February 14, 2020, as the second single of her debut studio album, Life Support. Selfish is a slow tempo pop ballad with stripped-down production. The lyrics of the song revolves around toxic relationships and feelings of betrayal.

Apart from singing, the dive was previously seen sharing tips about virtual dating. The VJ was seen explaining how to feel connected with your lover amid the distance created by Coronavirus pandemic. Anusha and boyfriend Karan Kundra were spotted having breakfast together, working out together virtually. Not only that, but the duo also explained how couples can go on a virtual date with each other. Watch the video here: