Avika Gor's pictures of her meeting the parents of her boyfriend Milind Chandwani have surfaced online. Read on to know more about the couple and see their pics

Avika Gor's pictures of her meeting the parents of her boyfriend Milind Chandwani have surfaced online. The pictures in question were posted by Chandwani himself. The pictures below see the Balika Vadhu actor posing with her beau in a series of pictures, one of which also happens to include Milind's family. The pictures from that very event can be found below as well as on the Instagram handle of the two.

The first post in the list of images above, as one can see, has Avika Gor's boyfriend asking the year 2020 to be kind to him and Avika, while he simultaneously elicited reactions from his followers about what their New year's Resolution is. Amongst the many responses, the one that stood out was Gor's, who left a comment that read, "To love u 100000000 times moreeee". The screenshot of the same can be found below as well as on the Instagram handle of Avika Gor's boyfriend. 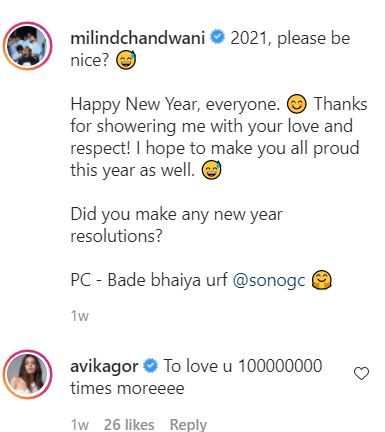 It has been said that Avika Gor and Milind Chandwani have been seeing each other for quite some time now. The actor confirmed her relationship with Chandwani as recently as November 12, 2020, through an image of the two posted by Gor. The post came with an elaborate caption, through which, Gor expressed her sentiments and feelings towards her beau. Chandwani is the CEO of a start-up known as Camp Diaries. The image can be found below.

Since then, the two have been posting pictures featuring their significant other on a regular basis. The couple can be seen spending quality time together by the poolside, by the beach, or with fellow friends and family members in their presence. Those images can be found below.