Here is how the Bengali television actors like Pooja Banerjee, Tina Datta and Devoleena Bhattacharjee wished their fans Subho Noboborsho on social media.

The Bengali New Year or Nobo Borsho, as it is called in Bengal, falls on April 14 this year. Although the Bengali New Year is to be spent in quarantine, celebrities are making sure to wish their fans on social media. Television actors like Pooja Banerjee, Tina Dutta and Devoleena Bhattacharjee have wished their fans Subho Noborborsho and here's how they did it:

Pooja Banerjee has become a popular name in the Indian television industry for playing the role of Nivedita Basu in the new version of Kasautii Zindagii Kay. Earlier today, the actor posted a picture of herself dressed in saree and wished her Bengali fans on the Bengali New Year. Adding a caption to the post, she wrote, "à¦¶à§à¦­ à¦¨à¦¬ à¦¬à¦°à§à¦· #ShubhoNoboBorsho #HappyVishu #HappyBengaliNewYear". She also shared a wish on her Instagram story. 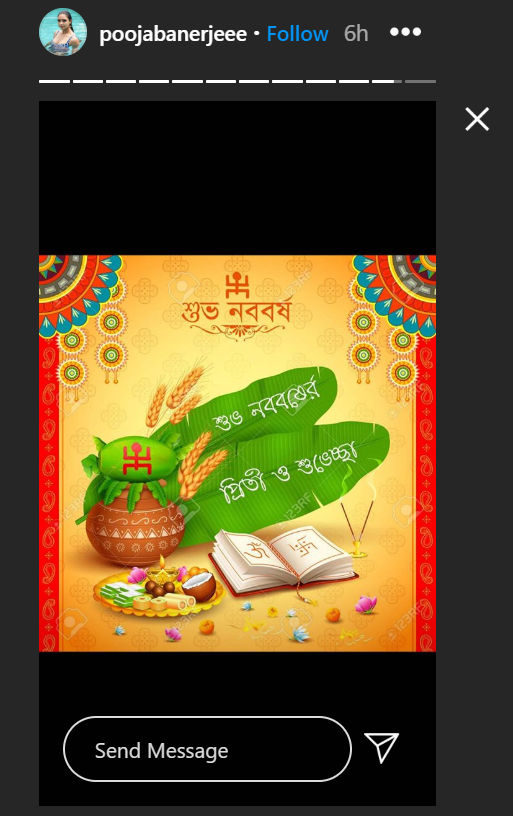 Devoleena Bhattacharjee, who gained fame with her participation in Bigg Boss 13, also wished her fans on the Bengali New Year. She too, like the others, posted a picture of herself in a blue saree. The caption to her post read, "Wishing you all a very happy Rangali bihu & Shubho noboborshaðŸ™ðŸ»â¤ï¸ .
.
.
.
#rangalibihu #noboborsho #devoleena".

Debina Bonnerjee was popular for her role as Sita in Ramayan which also starred her husband, Gurmeet Choudhary. Not many remember but the actor is also a Bengali. On the Bengali New Year, she also took to her Instagram account to wish her fans. The caption to her post read, "Shubho noboborsher preeti o shubheccha janai. .
#happybengalinewyear1427 #shubhonoboborsho".

Also Read: Pohela Boishakh Images To Wish Your Family And Friends On The Occasion Of Bengali New Year

Also Read: Pohela Boishakh 2020 | Everything You Need To Know About Bengali New Year 2020

PEOPLE HAVE PLEDGED SO FAR
LATEST NEWS
View all
2 hours ago
Nia sharma or karisma kapoor, whose floral lehenga do we love?
3 hours ago
Preksha mehta's suicide note recovered, says death of dreams had shattered her confidence
1 hour ago
Kratika sengar says she will 'never do' nach baliye with husband nikitin dheer; here's why
3 hours ago
Mahabharat's girija shankar opens up on what it was like to play dhritarashtra
1 hour ago
Neha dhupia's daughter mehr playfully interrupts 'roadies' audition; watch video