Bigg Boss 13 contestants Sidharth Shukla and Arti Singh got into a huge fight inrecent episode. And Arti's friend and ex-contestant is in full support for Arti.

Bigg Boss 13 is famous for its controversies, Weekend Ka Vaar episodes and hosting fun-filled games. Just like every season, Bigg Boss 13 has been at the top position of the TRP charts, as the contestants have successfully managed to entertain the audience since the show’s inception. But seems like fans and celebrities are not happy with what is going on inside the Bigg Boss house and with the finale coming closer.

Recently, Samir Soni posted a photo on his Instagram handle where he posted a throwback photo of him and Arti Singh where they can be seen hugging each other giving a candid smile. But it was not the photo that took the internet by storm, it was the caption that Samir Soni had posted along with the photo. In the caption Samir Soni lashed out at Sidharth Shukla and was in full support for Arti Singh, saying that he wants her to win the Bigg Boss 13 finale. Check out the comment and the post here below. 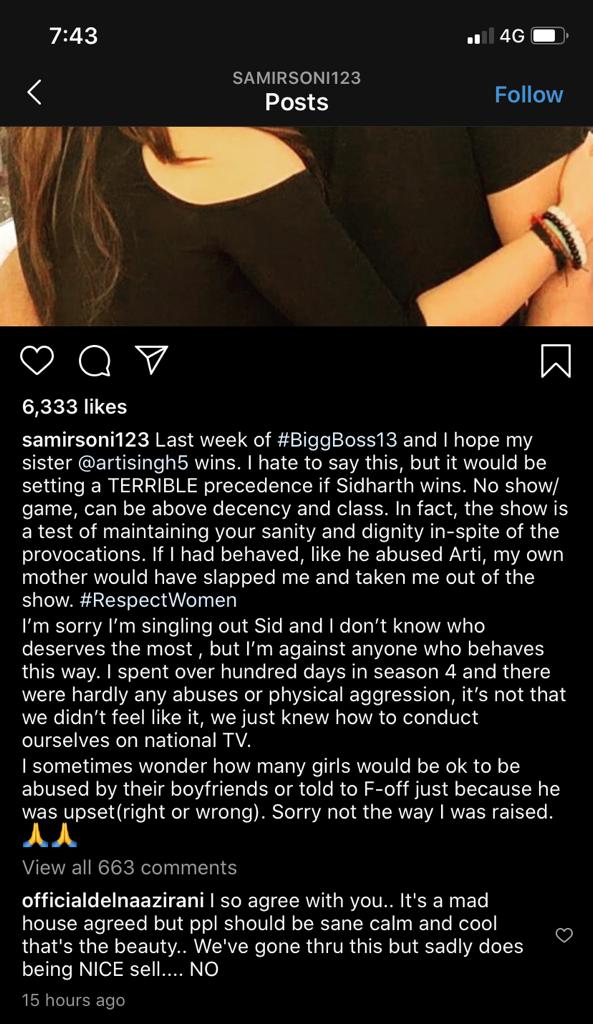 Also read | Bigg Boss 13: Dolly Bindra Takes A Dig At Asim, Says He Is Nowhere Near The Race To Win

Samir Soni’s reason to put a post on his social media handle was that Sidharth Shukla and Arti Singh got into a fight after host, Salman Khan had asked Sidharth Shukla on giving immunity to Paras Chhabra. Sidharth Shukla then told Salman Khan that he wanted to repay Paras for the times that he helped him and the second reason for not saving Arti or Shehnaaz because he did not want to choose between the two. Check out the video here below.

Also read | Bigg Boss 13: Sidharth Shukla Dresses Up As A Girl In This Hilarious Video; Watch