Ever since Paras Chhabra graced the show Bigg Boss 13, his girlfriend Akanksha Puri has also been grabbing several eyeballs. She always managed to raise attention for her opinion on Paras' stint on the show which included supporting him or sometimes lashing out at him for his closeness to fellow housemate Mahira Sharma.

Akanksha does not mince her words while stating her opinion on the activities of the contestants inside the house. But this time the Vighnaharta Ganesh actor has caught our attention for a different reason.

Akanksha has now got herself a new tattoo. But for those who are thinking it is related to beau Paras, are mistaken.

Akanksha took to her Instagram story to share the new tattoo. While the actor already had a lotus tattoo on her lower back, this time she added wings to it and the result will simply leave you awestruck. She also spoke to an online portal about her new tattoo reportedly.

The actor said that she already had a tattoo and had gone to a studio for just a touch-up but she soon decided to redesign it. She has also been expressing her disappointment over Paras' closeness with Mahira.

She had taken a dig at her beau on the social media saying that Paras should go to Mahira only if his three-year-old relationship can change so quickly for a three-month-old love. 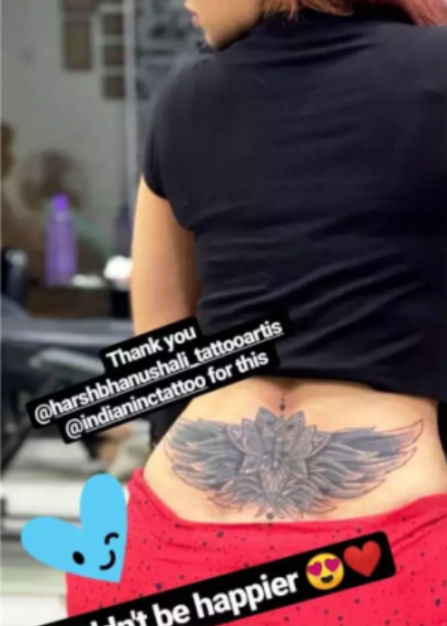 Akanksha mentioned on her social media that she would be the happiest if her friend started dating Shehnaaz. This surely came as a huge treat for all the SidNaaz fans out there.

The upcoming episode of Bigg Boss will see a Comedy Club task where all the contestants will be seen roasting each other in a hilarious manner.