Bigg Boss 13 is close to its finale. Bigg Boss 13 has become the most successful seasons of all times. The Bigg Boss house is full of twists and turns. Owing to its huge fan base and consistent popularity of the show, the show got extended by five weeks and will announce its winner in mid-February.

Bigg Boss 13 has always been a house full of twists and controversies. Recently, the makers of the show decided to invite the connections of housemates for four days, as they will participate in tasks with the housemates. Vikas Gupta who re-entered the Bigg Boss 13 house for the second time as a connection of Sidharth Shukla, recently made a big revelation on his social media handle.

Vikas Gupta reveals that Shehnaaz Gill will not get evicted:

Vikas Gupta revealed that Shehnaaz Gill aka Punjab ki Katrina Kaif is not getting evicted from the show. Few hours ago, Vikas Gupta shared a picture of himself with Himanshi Khurana and Shefali Jariwala just after coming back from the Bigg Boss 13 house. Fans started showering the mastermind with comments asking him about his stay and whether Shehnaaz will get evicted from the show today based on the latest promo.

Also Read | Bigg Boss 13: Vikas Gupta Feels Asim Riaz Should Have Got His Brother Umar As A Connection

One of the fans asked where Sana is leaving the house today or not, to which Vikas Gupta instantly replied saying 'Naaaaa'. Now fans are relaxed to know that Shehnaaz Gill will not get evicted from the Bigg Boss 13 house today. Shefali Jariwala also thanked him for protecting them and supporting them, when they needed the most. 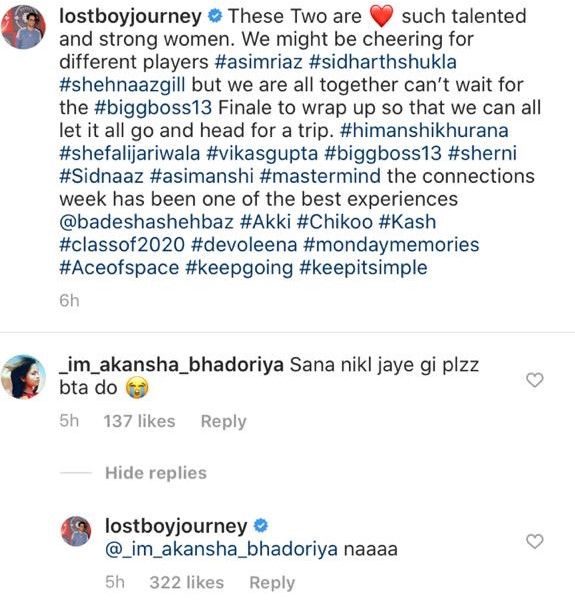