Carryminati Joining 'Bigg Boss 14' Sparks A Meme Wave On The Internet; Check It Out

Carryminati joining Bigg Boss 14 rumours started doing rounds on the internet recently and has now resulted in a surge of memes. Read to know more.

Those familiar with Ajey Nagar aka Carryminati's content may have seen him roasting the reality show, Bigg Boss over and over through the years. However, yesterday, Koimoi reported that the YouTube sensation has been bought on board for the upcoming season of the Salman Khan hosted show. Irony has struck twice for Carryminati now.

The YouTuber had kicked off a feud with TikTok content creators a few months back by dropping his roast video, however, he is now being rumoured to be in a relationship with Avneet Kaur, who is a former TikTok star. Similarly, he has also been vocal about not liking the concept of the Bigg Boss and is yet being linked with the show.

Also read: 'Bigg Boss 14' to have old contestants in the new season? Details inside

Netizens took notice of the reports of Carryminati joining Bigg Boss 14 and it almost came as a shocker for them. The YouTuber's fans and netizens in general as of now are busy sharing memes of him joining Bigg Boss. Check out the memes below - 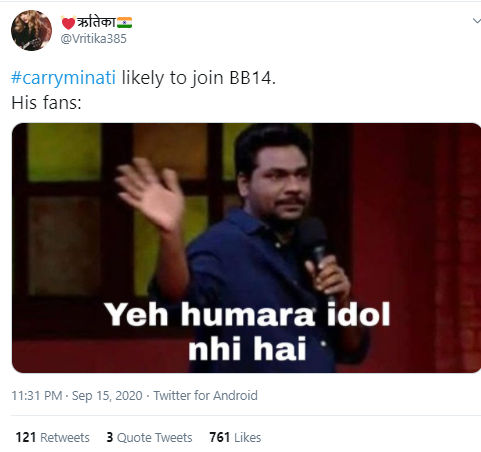 Every carry minati fan to him rn #carryminati pic.twitter.com/TXnfjyxmfG

#carryminati to be part of Bigg Boss14

Other youtubers to carry: pic.twitter.com/sCHeXLZW2D

#carryminati in bigboss 14 with 3 other youtubers. @CarryMinati pic.twitter.com/gxoe2Es9Uc

The teasers for the latest Bigg Boss season have hinted that this time around, the show will follow a different format. This season of Bigg Boss has been termed as the 'lockdown edition'. Thus, it won't be surprising if it includes social media stars besides having traditional celebrities on board.

Also read: Sidharth Shukla says 'he's back in confession room' but this time it's not for 'Bigg Boss'

Koimoi had reported that Carryminati and three more YouTubers have travelled to Mumbai and got into quarantine before shooting the first episode, which will be filmed on October 1, 2020. The YouTuber, who also streams video games on his second channel has only been giving voiceover commentary in recent days and not showing his during live streams which have fueled the fire of rumours even more. One of the biggest names on the YouTube platform joining a mainstream reality show evidently has ann entertainment value to it.

As of now, other celebrities who are confirmed to be participating in Bigg Boss 14 are Jaan Kumar Sanu, Nikki Tamboli, Nishant Malkani and Sara Gurpal. This season round, the show is expected to have a mix of YouTube, television and reality stars. Bigg Boss 14 will premiere on October 3, 2020.