On October 13, Shraddha Arya took to Instagram and posted an amusing video with her Kundali Bhagya co-star, Dheeraj Dhoopar. As seen in the video, the duo re-created Akshay Kumar's song, Chura Ke Dil Mera, from the movie, Main Khiladi Tu Anari. Shraddha could be seen running away from Dheeraj, while the latter chased her.

Sharing the video, Arya called it a 'pure Preeran and Dheesha' moment. She wrote, 'Pure #Preeran #Dheesha Moment !!!! #SA #DD #KB @dheerajdhoopar'. As soon as Dheeraj caught a glimpse of the same, he was quick to drop a comment. The actor dropped a classy emoticon with spectacles on.

Fans of the duo gushed over their adorable off-screen chemistry. A user wrote, 'OMG. #Dheeshra video after so long. Thank you so much for this video'. Another user wrote, 'I love you so much Shradha and Dheeraj'. Many simply dropped hearts and fire emoticons on the post and also asked the stars to often post such fun videos. 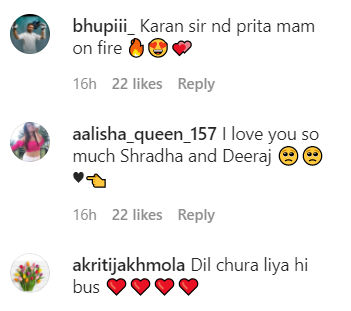 Shraddha Arya and Dheeraj Dhoopar play the lead roles in the popular daily soap, Kundali Bhagya. The duo time and again keeps sharing glimpses of their whereabouts on social media. In no time, their fan clubs repost their pics and videos on Twitter and drop endearing comments about their camaraderie.

As per the recent Kundali Bhagya episode updates, Pawan tries to wake up Prithvi and his men, whereas Preeta tries to burn the ropes and escape. However, Pawan spots Shrishti behind the window. Everyone at the Luthra house is tensed for Preeta. Sarla vents out her frustration on Maira and urges her to not interfere when she talks to Rakhi. Maira has definitely created a rift between Karan and Preeta.

Apart from Kundali Bhagya, Dheeraj Dhoopar also appeared in a music album titled Humko Tum Mil Gaye, alongside Hina Khan. More so, a few days ago, he took to Instagram and shared a still with Surbhi Chandna as he began shooting for Naagin 5. Dheeraj filled in for Sharad Malhotra, who recently tested positive for the novel Coronavirus.