Divyanka Tripathi Dahiya recently dropped a fun video on Instagram with husband Vivek Dahiya. It was her caption that stole the show. See her amusing clip here

On Friday afternoon, Divyanka Tripathi took to Instagram and dropped a fun video in which she was dancing as per her husband, Vivek's gestures. While Divyanka was standing near a quirky background and dancing, it was Vivek's fingers that panned around in the video. Sharing the fun-loving clip, she wrote, "Pull the right strings to make an otherwise inert heart dance in glee." More so, she tagged her husband as the 'hand model' and also went on to call him her 'mister'.

She added hashtags like "#PuppetDance #HandAndBodyCoordination# NotAnEdit #ReelItfeelit #ReelKaroFeelKaro #trendingvideo #viralvideo #divyankatripathidahiya." The duo often shares fun videos on Instagram that garner a lot of attention from fans. As soon as this post was up, Divyanka's Yeh Hai Mohabbatein co-star Aditi Bhatia wrote, "So cute," and comedian Gaurav Gera also dropped happy emoticons. A user wrote, "Divyanka Tripathi and Vivek Dahiya are the cutest ever."

Divyanka's 'mister' has the strings to her heart 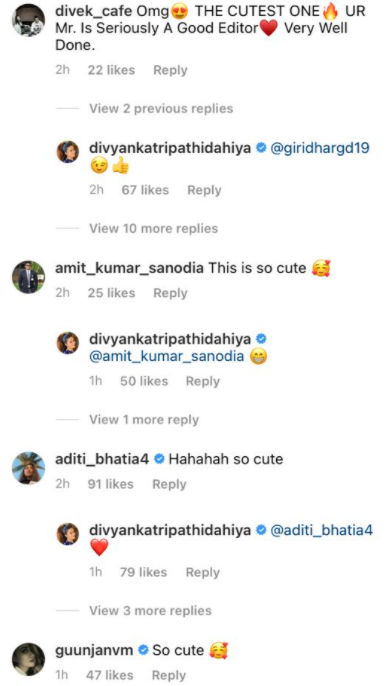 Also Read | Cardi B Goes On A Twitter Rant About Her Acne; Kehlani Comes To The Rescue; Details Inside

In December, the couple jetted off to Udaipur, the City of Lakes to ring in Mrs & Mr Sharma Allahabadwale actor's birthday. Divyanka Tripathi's husband had planned a surprise for her and looked like she was elated after experiencing it. She wrote that for her, birthdays were never so important. However, after being pampered by Vivek and that he leaves no stone unturned to bring a smile on her face, she added that she wants December 14 to continue for an entire year. The duo escaped for a week-long vacation and shared many glimpses of their trip.

On the work front, Divyanka is a part of the show Crime Patrol, whereas Vivek made his digital debut with his role in the show, State of Siege: 26/11. In it, he plays the role of Captain Rohit Bagga. The ZEE5 Original show garnered heaps of praises from fans. "People can kill for their country, but he is willing to die for his. Watch me play the role of Captain Rohit Bagga in State Of Siege 26/11," he wrote on Instagram as he shared his look from the series.