Television producer and creative head of Balaji Telefilms, Ekta Kapoor, has redefined the concept of daily soap operas with her numerous family-drama serials. Kyunki Saas Bhi Kabhi Bahu Thi and Bade Ache Lagte Hai among the others were some of the exceptional serials Ekta Kapoor launched on TV. These high on drama serials have left a lasting impression on the audience and many fans still remember them. Recently, Ekta Kapoor took her fans and followers on a stroll down memory lane. Recently, her 2001's popular serial Kabhii Sautan Kabhii Sahelii turned 20 and Ekta Kapoor shared the title track of the serial with a note.

Recalling her memories, Ekta Kapoor wrote a caption that read, 'This show has sooooo many jokes ! I wish I have d English version I’ll share it one day!', in the caption. Further, mentioning about the relationship the serial  gave her, she added that, 'I met my best frn n close buddy thru this show 20 years ago we did this one !!!' In the last line of her caption, 'N d title almost became as famous as d show ! Kabhi sautan kabhi Saheli 😅😅😅😅🥳🥳😭😭😭'.

Ekta Kapoor's fans and followers poured their love in the comments section as soon as Ekta shared it on her social media handle. Many of the users called it 'legendary', whereas a section of users wrote 'childhood memories'. Apart from fans, the lead actor of Kabhii Sautan Kabhii Sahelii and Ekta Kapoor's best friend Anita Hassanandani also mentioned a memory that is associated with the show. Expressing her gratitude, Anita's comment read, 'Ppl still remember me as Tannu!!! And imagine @tanusridgupta (tannu) was not even in ur life then...... amazing nah!. 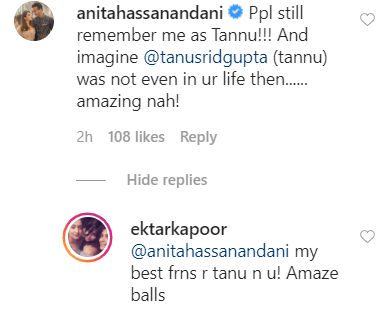 READ | Jennifer Winget, Nia Sharma And Other TV Actors Who Were Launched By Ekta Kapoor