Erica Fernandes took to her Instagram handle and shared a series of pictures from her latest photoshoot. In these pics, she can be seen wearing huge glasses.

Erica Fernandes recently treated her fans by giving a sneak peek into her recent photoshoot. The actor took to her Instagram handle and shared a series of pictures, wherein she can be seen wearing huge glasses. Erica Fernandes also revealed the reason why she wears glasses. She wrote, 'Rubbing your eyes dint work ? Try wearing your glasses ðŸ¤“'. Take a look at Erica Fernandes' Instagram post:

In this Instagram picture, Erica Fernandes stunned in a light olive green saree. The ethnic outfit had a thick blue coloured border design. It also had golden straps embedded on the saree. Erica clubbed the saree with a blue blouse. The top had a sleeveless design look.

The actor wore the saree in a different way, she tied up the pallu at her waist. Erica Fernandes opted for a tan and nude look. She wore a light nude lip colour. She had minimal eye makeup. Erica's hair was tied in a messy and tight bun. The actor layered her traditional outfit with varied types of accessories.

She donned a long and huge neckpiece. The necklace was an oxidised accessory. Erica's jewellery was designed by Silverays. She posed for the picture by sitting on the floor. She had her one hand placed on her head, like a tired look. The actor also had two lamps as props kept beside her.

Fans and followers of Erica Fernandes were quick to share their responses in the comment section. Erica Fernandes' photos received more than 180k likes on Instagram with more than 1000 fans' reactions. One of Erica's fans wrote, 'My beautiful princess, I love you so much, my love â¦â¤ï¸â©â¦â¤ï¸â©ðŸ˜', while another added, 'the prettiest girl in the world ercia'.  Another user also commented, 'Looking sooo beautiful you gorgeous girl ðŸ”¥ðŸ”¥ðŸ¤“ðŸ¤“'. A fan comment read as 'As you say so ðŸ¤“ but you look pretty in blurry too ðŸ˜ðŸ˜ cutie #ericafernandes'. Take a look at some fans' reactions below. 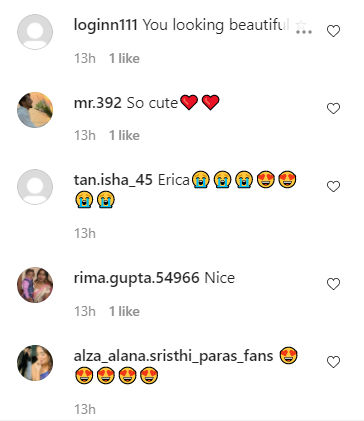