Erica Fernandes took to her IG story & talked about the immense love her videos are getting. She also expressed something else to her fans, check out what it is

Erica Fernandes recently debuted on TikTok and fans are mesmerised to see her groove. The Kasautii Zindagii Kay actor has just completed four days on the online app and has been receiving humongous love from her followers. On May 11, Erica took to her Instagram story and announced that one of her viral videos hit 24 million views with 24 hours of its release. Fernades also had something else to tell her fans.

Erica thanks fans for showering love on her videos

Erica Fernandes debuted on TikTok four days ago. However, Kasautii Zindagii Kay's Prerna has a massive fan following, which she herself is overwhelmed about. Taking to her Instagram story, Erica Fernandes penned down that it has just been four days on the app, and one viral video of hers has crossed 24 million views within 24 hours. She also wrote that her followers have inched 300K+. The Kuch Rang Pyaar Ke Aise Bhi actor said, "Thank you guys for love."

Furthermore, Erica Fernandes also had something else to tell her fans. She wrote, "Will try to keep you entertained through this platform and you will definitely get to see a different side of me, followed with a wink emoji." By the looks of her two recently shared videos, Fernandes seems all excited to explore the app and keep her fans enthralled. Take a look.

Also Read | Erica Fernandes hails Urvashi Dholakia, says 'You have made Komolika who Komolika was' 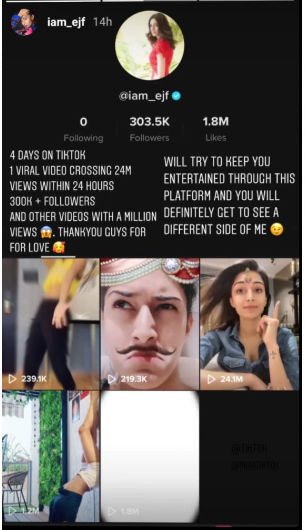 Recently, on her birthday on May 7 Erica Fernandes interacted with an entertainment portal and opened up about her character as Prerna in Ekta Kapoor's famous daily soap- Kasautii Zindagii Kay. When questioned about how her role as Prerna in Kasautii Zindagii Kay relates to herself in real life, Fernandes said that just like Prerna, she believes in 'forgetting and forgiving.' Erica also talked about how her friends feel that she is too forgiving.

Erica Fernandes, amid the COVID-19 lockdown, also collaborated with Urvashi Dholakia for a fun video. In the visual, the duo can be seen asking questions to each other. The Kuch Rang Pyaar Ke Aise Bhi actor and Dholakia are seen playing the 'Never have I ever' game. In the latter part of the video, Erica Ferandnes talks about Urvashi Dholakia's character as Komolika in Kasautii Zindagii Ki. Fernandes praises Urvashi's role and tells her- 'You have made Komolika who Komolika was.' Watch the video here: