Ghum Hai Kisikey Pyaar Meiin is a popular drama series that airs on Star Plus. Recently, the show completed its 100-episode run. Read ahead to know more.

The set of the show was specially decorated for the occasion. A custom-made cake was also brought in for the celebration. The team enjoyed every moment at the celebration and even cut the cake on the set. The celebration also included actors such as Kishori Shahane, Mitali Nag, Yash Pandit, Bharti Patil, Shailesh Datar, Yogendra Vikram Singh and more. The celebration included not one or two, but five cakes.

The series is a remake of Star Jalsha's Bengali series named Kusum Dola. It is produced by Cockcrow Entertainment and Shaika Films. In the show, Neil plays the role of an IPS officer. He is shown to be in love with Aishwarya Sharma but due to his duty, he has to marry Ayesha Singh who is the daughter of a martyr. The love triangle on the show has been receiving positive acclaim from fans.

To make the show more interesting, the makers roped evergreen actress Rekha to narrate the story of love and sacrifice. The serial has been on the top of the TRP chart since the last two months receiving an overwhelming response from the audience. The show has been filmed mainly at Mumbai, while some sequences were shot at Nashik.

Co-stars of the show Neil Bhatt and Aishwarya Sharma are officially together. Two days ago, the couple took to their Instagram to announce the same. Sharing pictures, they captioned the post saying that from all the madness to the fun and all the love that bloomed, for a lifetime they had become one. The pictures were from their Roka ceremony where they could be seen twinning in pastel green traditional outfits. Aishwarya wore a sharara whereas Neil wore a kurta pyjama. Their pictures went viral in no time and followers rushed to the comments section to shower blessings on the couple. 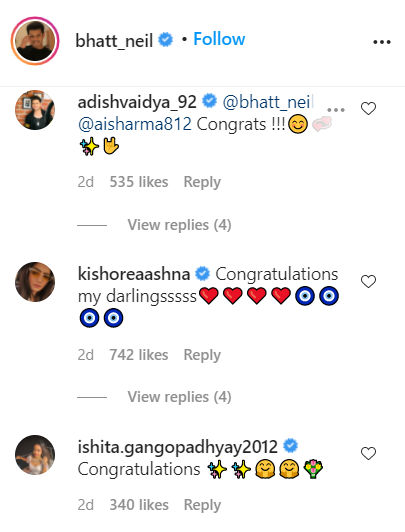 Also read: Check Out Dhanush's Photos From His New Year's Celebration With Family