Hina Khan completed 12 years in the film and television industry on January 12, 2021, i.e. today. The actor, on the occasion of her coming so far in the television industry, has been sharing several pictures and videos on how she’s enjoying this special day. Apart from that, fans also took to the micro-blogging site to trend “Hina ke bemisaal 12 saal” on Twitter.

On seeing the trend, Hina Khan took to her Instagram handle to share a screengrab and also thank fans for all their love and support. In the picture, one can see the Hina’s trend on No. 10 positions and along with that she wrote, “#Hinakebemisaal12saal trending. Thank you”. Check out the post below. 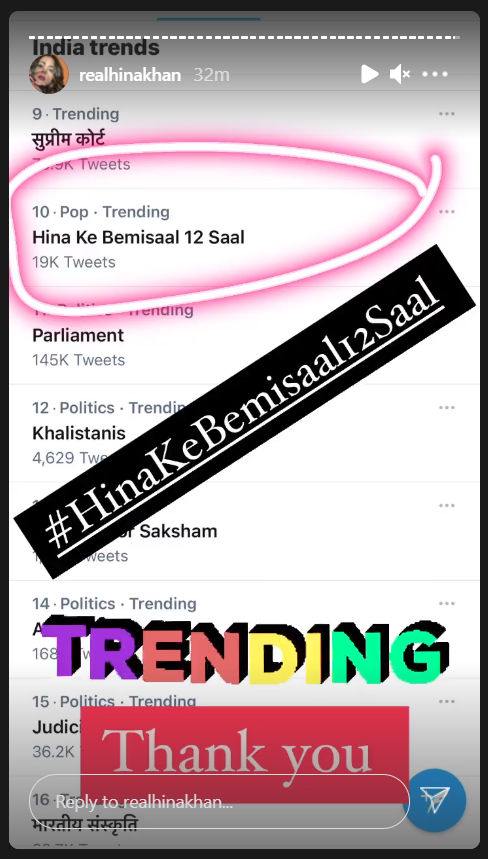 Taking to their respective social media handle, fans have gone all out to share several pictures, videos, and have also penned heartfelt messages for the actor on this day. Some users also went on to congratulate the actor on her success and wished her luck for the future. While some also went on to celebrate this day by sharing pictures of cake, sweets and much more.

One of the users wrote, “Congratulations stunner for completing 12 years in the industry. Thanks for respecting your fans, their love n efforts. Wish you so much love n happiness. Love you @eyehinakhan. Keep Slaying, Keep Smiling and Keep Inspiring. Hina Ke Bemisaal 12 Saal”. While another wrote, “Hina and her aura, was and is unmatched. she has attained all in life with her hard work, and has always pushed self to be better than before, her optimistic approach towards work has always been applauded, @eyehinakhan and her Twitter Moments. Hina Ke Bemisaal 12 Saal”. Take a look at a few tweets below.

Hina and her aura, was and is unmatched ....she has attained all in life with her hardwork, and has always pushed self to be better than before, her optimistic approach towards work has always been applauded, @eyehinakhan and her Twitter Moments
Hina Ke Bemisaal 12 Saal pic.twitter.com/DKAVIvYX9D

Dreams come true of those who belive in self,and that's what @eyehinakhan did, she never stopped believing d working hard, and on 7th February 2020, made her bollywood debut on big screen via Hacked a movie with strong concept as Sameera n was outstanding
Hina Ke Bemisaal 12 Saal pic.twitter.com/FGZnTSm7WW

From Starting the career as the naive shy girl to Becoming the undisputed Queen of ITV...Representing TV accross various international platform!.12 years have been one of the most beautiful Journey..!!

debut in digital world with Damaged 2
She is really the one who always tries to give her best and try to work beyond her comfort level
Gauri Batra in Damaged 2 was amazingly performed by her
Hina Ke Bemisaal 12 Saal
@eyehinakhan pic.twitter.com/N9H00a2nt3

The achievements which Hina Khan achieved in her 12 years of career cannot be enumerated in a thread or tweet
She is just too great to be explained in words
Hina Ke Bemisaal 12 Saal pic.twitter.com/nnKO2s7GZk

Hina Khan made her debut with the TV show Yeh Rishta Kya Kehlata Hai which also completed 12 years today. Post that the actor went on to star in several films, tv shows and series. The actor is known for her roles in films and shows such as Kasautii Zindagii Kay, Hacked, Country of Blind and many more. Hina Khan was reportedly one of the Indian television industry's highest-paid actors in the year 2015 and 2016. Apart from that she also enjoys a massive fan following which is quite evident through her social media handle.