Hina Khan shared an inspiring quote on 'Comparison' and urged her followers to not create any kind of 'Fan Wars'. Take a look at what the 'Hacked' actor shared

Actor Hina Khan, who became a household name after playing Akshara in Yeh Rishta Kya Kehlata Hai, has not looked back ever since then. Khan also became the first television actor to grace the Cannes Film Festival, which is usually the playground of A-list movie stars. Hina Khan has now also made her Bollywood debut and featured in several short films.

She is quite active on social media and is known to express her opinions fearlessly and wholeheartedly. Hina Khan, who has experienced many ups and downs in her career, shared her thoughts over 'comparison' that often prevails in the industry.

On Tuesday night, the Hacked actor took to her Instagram to share a very motivating thought. The quote read, "Beauty is not based on an algorithm of likes and comments." Moreover, adding to this, Hina Khan wrote, "All you people out there, stop comparing for heaven's sake. Don't create Fan Wars. Not that it matters to me, but it might affect the other person being compared. Let's lift each other". 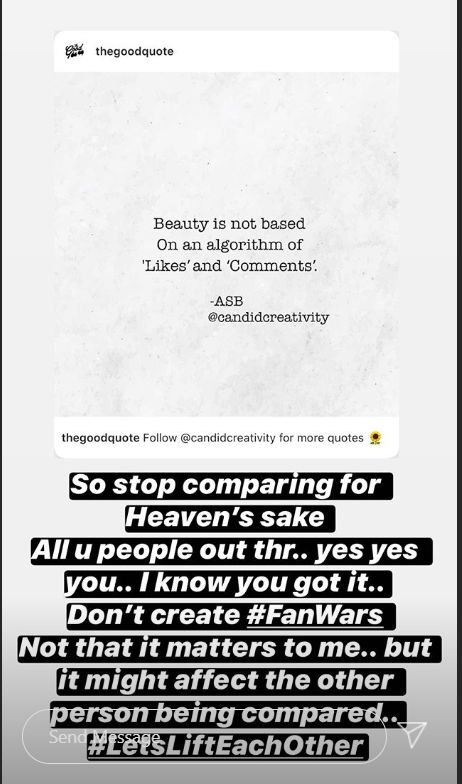 This is not the first time when the Kasautii Zindagii Kay actor has expressed her thoughts about it. Back in 2019, Hina Khan couldn't stop herself from countering an entertainment portal's opinion on her and Shivangi Joshi's fashion sense. While the website said that Hina knows how to style herself better than Shivangi, the former raised her opinion on the comparison made between actors. Calling out to Shivangi Joshi as a 'Beautiful Girl', the Lines actor wrote, "Comparison makes no sense, spread love instead of hate and misunderstandings." Check out the tweet below.

PEOPLE HAVE PLEDGED SO FAR
LATEST NEWS
View all
1 day ago
TV's power couple Gurmeet Choudhary and Debina Bonnerjee share their daily workout regime
1 day ago
Taarak Mehta Ka Ooltah Chashmah’s Munmun Dutta has this to say about resuming shooting
1 day ago
Aishwarya Sakhuja tags Mumbai Police and calls out an obscene message she got from a fan
1 day ago
Gabrielle Union files complaint against NBC, 'America's Got Talent'
1 day ago
'Taarak Mehta Ka Ooltah Chashma’s' Mandar has an adorable birthday wish for on-screen wife