When Hina Khan walked the Cannes Red Carpet in 2019, a Bollywood journalist slammed her with an inappropriate statement on Instagram which sparked a huge debate

When Hina Khan walked the scintillating star-studded Cannes red carpet in 2019, she became the only television star who graced the event. While Hina Khan looked ravishing and happy, social media took a toll on her moment by trolling the actor for the same. Indian journalist Jitesh Pillai took to his social media and shared Hina Khan's Cannes picture with a caption saying- 'Cannes has suddenly become Chandivali studios kya?’. The statement did not go down well with Khan, which further embroiled a cold war between the journalist, Hina Khan, and her supporters from the television industry.

When Hina Khan's Cannes debut sparked off a huge debate

After Jitesh Pillai's statement on Hina Khan went viral, stars of the television industry boomed in support of the actor. Cannes Film Festival, which is usually the playground of A-list movie stars, was first time graced by a television star from in the Indian fraternity, said many of Hina's friends from the industry. Moreover, many also added to the brigade by creating hilarious, yet unwanted memes over Hina Khan's red carpet appearances. Take a look at how Hina Khan and other celebrities stormed twitter with their reactions. 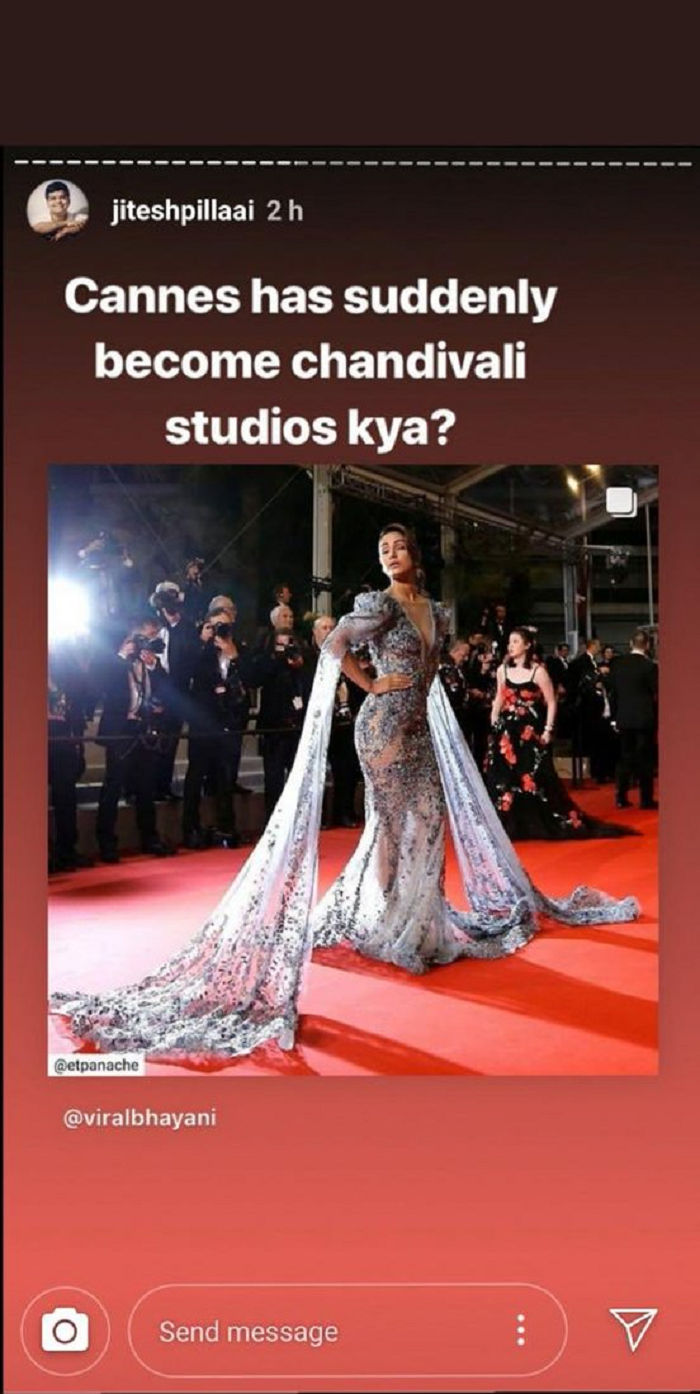 I was persistent, I m constant n I will b efficient again n again again. Don’t know where I belong, don’t know if I have to, as d Place don’t define me! Bcause as always I will work my a** off n I will make my own PLACE. My promise,a proud outsider from my Chandiwali studios. ðŸ™

I'm appalled at this insta story of @jiteshpillaai
Maybe, you had things ready for you maybe you didn't have a humble beginning, maybe you did....but I think hobnobbing with the gliterati you have forgotten your roots. pic.twitter.com/0xU1V3cFJ0

Cannes is NO Chandivali studio. It can't ever be. Chandivali is where many TV shows, ad films and features have been shot. Some very iconic one's too. @jiteshpillaai

To a continued journey of evolution and breaking norms, @eyehinakhan ! You go girl ðŸ”¥

Hey @jiteshpillaai Cannes is neither chandivali studios nor biased towards any medium just like some Ass-licking swine editors of India. And @eyehinakhan ‘s journey from chandivali to Cannes has definitely burnt a lot of arses.. https://t.co/jItvTWF1YA

Soon after Hina Khan's controversy took over the internet, Jitesh Pillai penned down an apology note

Jitesh Pillai wrote, "My apologies to Hina Khan. My Insta caption has been grossly misconstrued. I would never belittle an artiste. Those who know me well enough will agree that I'm inclusive and always appreciative of talent. My remark was meant to suggest that Cannes has Bollywood centric. Studios like Chandivali etc are the very studios that I've spent my time as a rookie reporter. I would never run down my wonder years spent in these studios. My sincere apologies to Hina again. I wish you continued success.

An unexpected invitation by a world star.. personally, after I gained consciousness and prepared my self to finally make it, I was still an outsider but only until you arrived. You didn’t need to, but still never left my hand for a second, introduced me to the people I probably wouldn’t have met and I felt as if all the achievements of my little career happening in fast forward as you present me as a star to each one of them. You somehow know everything ..as you mentioned my debut film and praised me for my hard work and appreciated me for the risks I have taken in my choices. Yes I have taken risks and I am still taking them, whr I almost have everything in my television career ..position,power,money everything.. But someone has to start somewhere I believe.. I always wanted to break the stereotypes and prove it to the world that television actors have it all.. Give us the opportunity our fare share and we will kill it..Not easy at all I know.. But ya I will keep trying keep working hard and make it possible.. I REPEAT TELEVISION HAS IT ALL.. Talent, Glamour, Elegance, Beauty, Grace, Right attitude , and Professionalism.. I am taking baby steps, And I will keep doing that no matter how much criticism one has to face and I will make my own place I promise.. we will face it and win over it as long as we are together.. Hearfelt Gratitude to each one of you for standing by meðŸ™ WE HAVE IT ALL GUYS.. With my first debut film called LINES, I am trying hard very hard to erase the lines created between talents and mediums ðŸ™And coming back to @priyankachopra your inclusiveness surpasses my ability of comprehension. Your deliberate attempt to lift up people around you not for their backgrounds but their talent is one of a kind. You are a walking inspiration! When a human being is a personification of an idea of self belief, Grace , humility, substance and greatness, that person can only be you priyanka Chopra You are already the best version of my dream self in the future I want and I believe thousands others like me do too. This is the Priyanka Chopra who believes in lifting others and growing togetherðŸ™ you are a sweetheart @nickjonas #AnOutsider #FromTelevisonToCannes

PEOPLE HAVE PLEDGED SO FAR
LATEST NEWS
View all
16 hours ago
Mouni Roy shares a goofy picture as the 'blinding beauty' that she is; See pic
16 hours ago
'Ramayan' Written Update May 29: Sugriva and Ram become allies
4 hours ago
Who was the inspiration behind Sunil Grover's hit character 'Gutthi'?
22 hours ago
Archana Puran Singh and hubby Parmeet Sethi giving #couplegoals in these pics; See here
22 hours ago
'Ramayan': Vindu Dara Singh shares interesting story on how his father was cast as Hanuman