Mesmerised by the singing of one of the Indian Idol 12 contestants, former Indian cricketer Virender Sehwag took to Twitter and gave him a shout out.

The January 31 episode of Indian Idol 12 featured Alka Yagnik, Udit Narayan, and Kumar Sanu as special guests. The special episode had the theme of 100 songs from the ’90s. Audiences got to experience several phenomenal songs by the participants. Bowled over by one of the contestants, the former Indian cricketer, Virender Sehwag gave a shout out for his performance. Read ahead to know more.

One of the participants, Pawandeep Rajan presented the song Sanson Ki Zaroorat Hai Jaise from Aashiqui (1990). His performance received a lot of love from the audiences and the judges. Sehwag shared a clip of his performance on Twitter. Alongside, he wrote that small towns consist of so much talent. He added that Pawandeep is from a small town in Uttarakhand and is "awesome". He further wrote that he loved the special episode of Indian Idol where the contestants sang 100 songs from the ’90s. A lot of netizens took to the comments section of Sehwag's tweet and applauded Pawandeep for his singing skills.

Small towns have so much talent. Pawandeep Rajan from a small place in Uttarakhand is just so awesome.
Loving today’s Indian Idol where they are singing 100 songs from the 90’s. pic.twitter.com/kJH4U4h5PM 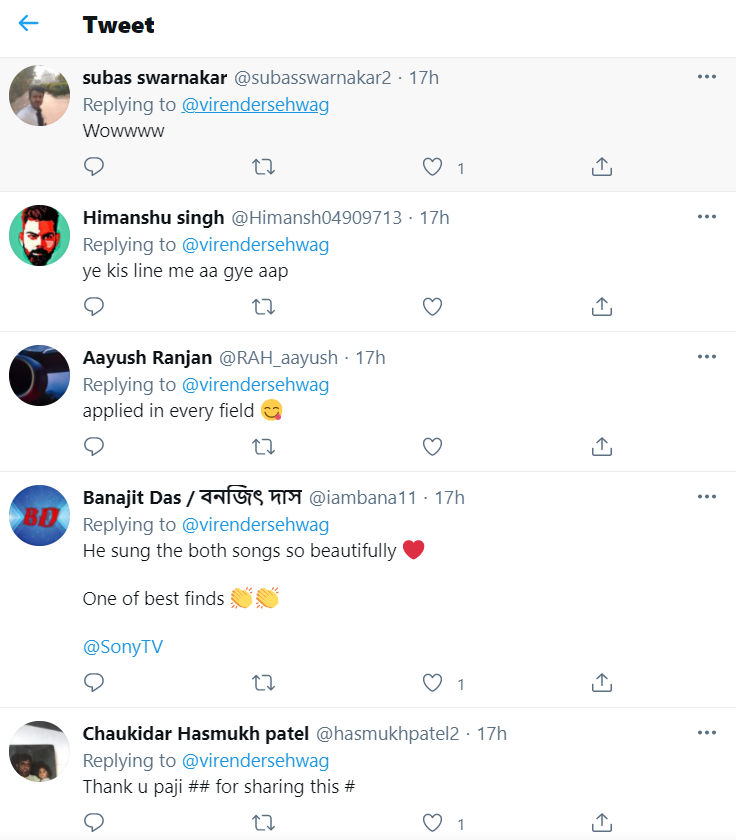 Pawandeep Rajan, 24, is from Champawat, Uttarakhand. He is the winner of &TV’s music reality show Voice India Season 1. Besides singing, he is well skilled in playing several musical instruments like Guitar, Keyboard, Tabla, Piano and more. He has made his debut as a music director in Marathi music industry. For his achievements, the Government of Uttarakhand awarded him as the Youth Ambassador of the state.

Indian Idol 12 airs on Sony Entertainment Television. The show premiered on November 28, 2020. The Indian Idol 12 judges are Himesh Reshammiya, Vishal Dadlani, Neha Kakkar and it is hosted by Aditya Narayan. Some of the Indian Idol 12 contestants are Shanmukha Priya, Sawai Bhatt, Anjali Gaikwad, Sireesha Bhagavatula and many more.

Back in 2017, Virender Sehwag had also made a guest appearance on Indian Idol in its season 9. Sehwag made the show interesting by shaking a leg with Anu Malik. He also performed a duet with Sonu Nigam on the song Chala Jaata Hoon. He spoke about his interests in music on the show.

With the utterly delightful @virendersehwag on #IndianIdol 9 sets.. such a joy to hav u with us veeru.. ❤️️ pic.twitter.com/tZmZ8Hqfz2