Television celebrities took to social media and requested authorities to close down the liquor shops among which is actor Kapil Sharma. Read here.

With the coronavirus outbreak in India, the government authorities extended the nationwide lockdown for two weeks more. But while they imposed the extension of the lockdown, they also opened up few shops and businesses including the liquor shops. It was also said that people must maintain social distancing and follow the necessary precautions. But seems like things didn't go as planned. India allowed liquor shops to remain open on Monday, May 4, 2020, leading to chaotic scenes across cities. Many television celebrities also took to their social media handles and requested authorities to close down the liquor shops due to the chaos and no social distancing maintained.

As per reports, there was a lot of commotion arisen outside several liquor shops. People went all out on the roads to visit the liquor shops to buy liquor after over a month. Comedian-actor Kapil Sharma totally disagreed with the act and took to his Instagram handle to share an Insta story of the crowded queue in front of the wine shop. Along with a picture, Kapil Sharma also wrote, “Ye lo social distancing ki aisi ki taisi. Bewakoof log, sharab se hi, corona se marenge yeh.” Check out his story here. 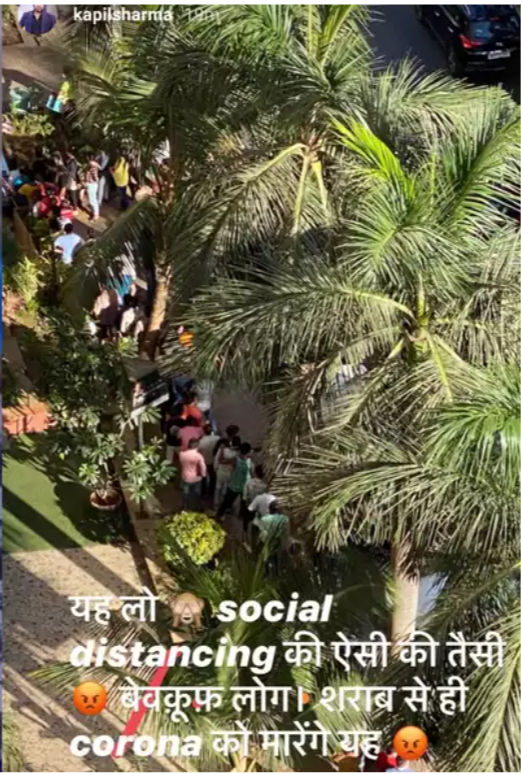 Other celebs talking about the same issue

And seems like it is not just Kapil Sharma who is condoning people for breaking social distancing rules, other celebs such as Aishwarya Sakhuja who spoke about the same in an interview. And Karan Wahi, Karanvir Bohra took to their social media handle to address this issue.

In a recent interview with a news portal, Aishwarya Sakhuja said that with the liquor shops now being open, people are crowding the shops. She also went on to question how are they managing to get all that money. She also emphasised saying that she is politically incorrect. She also asked people to keep calm and stay indoors.

Karan Wahi took to his Twitter handle as he shared a picture of people crowded outside the liquor store. He also wrote saying requesting the government to please shit the liquor shops as it is dangerous for people and especially for the police officers monitoring them. He also said that if home delivery services could be started as the current situation is very bad. Check out his tweet below.

It’s a request to the Govt to please shut these liquor shops as it’s reallly dangerous for people and specially for the cops monitoring them.
If need be , home delievery services can be started but this would be really bad.@CMOMaharashtra please pic.twitter.com/0U0xse2qsx

Karanvir Bohra also took to his Twitter handle as he shared a video showing the long queue to the wine shops. He also wrote asking the need to open wineshops? He also said that what if one person is also infected with coronavirus, what a disaster it would turn into. Check out his video below.

What was the need to open wineshops ....
God forbid not, but if 1 person is infected with #covid19 , what a disaster it will turn out to be....
This is still "civil" enough a line as compared to the situation in Delhi and other parts ðŸ¤¦ #lockdownhustle pic.twitter.com/0WQxgHzXH4

Also read | Kapil Sharma's Lockdown: Here Is Everything The Comedian Has Done This Past Week