Amidst the Coronavirus outbreak, several actors have been encouraging their fans to stay at home. During this time, social media has played an important role as the actors are able to reach out to their fans. Some actors have also created awareness regarding domestic violence, through the initiative #LockDownMeinLockUp. The initiative focuses on women who have been victims of domestic abuse. But actor Karan Patel has come up with a unique video that targets the parents of the abusers.

Karan Patel took to his Instagram account to share a video which is addressed to the in-laws of the domestic abuse victims. In this hard-hitting video, Karan Patel has asked the parents of the abusers to stop calling the abuser their 'son'. He believes that the person who hits his wife cannot be a man. He also urged the parents of the abusive husband to not get out of the house but instead, he asked them to send their son out. Karan Patel captioned the video saying "Her Silence is actually the calm before the storm. While she is still quiet, I’d suggest you Grow a pair, Be a Man and Stop domestic violence. #DontTestHerPatience #SheCanKickYourAssAnyday".

Here is a look at the video that Karan Patel shared

The video captured everyone's attention in no time. Karan Patel's video received about 35 thousand likes in just a few hours. Not just the fans but also actor Karanvir Bohra appreciated the video saying "Too good". Here is a look at some of the comments on Karan Patel's video. 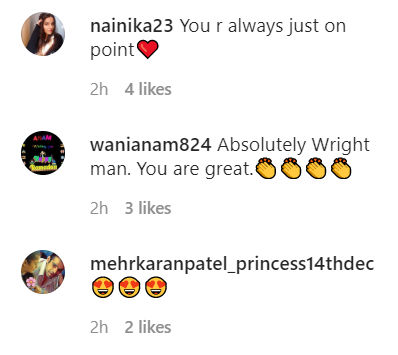 PEOPLE HAVE PLEDGED SO FAR
LATEST NEWS
View all
4 hours ago
From Sujal-Kashish to Mihir-Tulsi: 5 iconic on-screen pairs from Ekta Kapoor daily soaps
1 hour ago
Nia Sharma reacts to Ekta apologising to 'Naagin 4' team, says 'You've been considerate'
1 hour ago
Tough words, little drama, familiar champ in virtual bee
27 mins ago
KBC's first crorepati Harshvardhan Nawathe had become the CEO of an MNC; Read details
23 mins ago
Jennifer Winget to not celebrate her birthday this year, says its 'trivial & unimportant'