Kartik Aaryan was recently compared to Nazar 2 actor Sheezan Mohd; this comes after Sheezan shared a similar pic to Kartik Aaryan. Take a look at it here

While celebs are stuck home, they have been interacting with their fans and are sharing pictures of themselves during quarantine, and young star Kartik Aaryan is no exception. Kartik has been interacting with fans and is also enjoying his time off. But Kartik Aaryan's fans are comparing him to Sheezan Mohd. This is not the first time both actors are being compared to each other. During the time of lockdown, both the stars have grown a very similar beard which is making them look very similar. Take a look at their pictures and see for yourself.

Sheezan Mohd took to his Instagram on May 4, 2020, to share a selfie in his new bearded look. In the post, he is seen in a green t-shirt and a messy beard. He captioned the picture by writing "Keep it raw!! #morningpost #sunfaced #instapic #quarantinelife #beard". After Sheezan posted the picture, many fans compared him to Kartik Aaryan. Take a look at the post here. 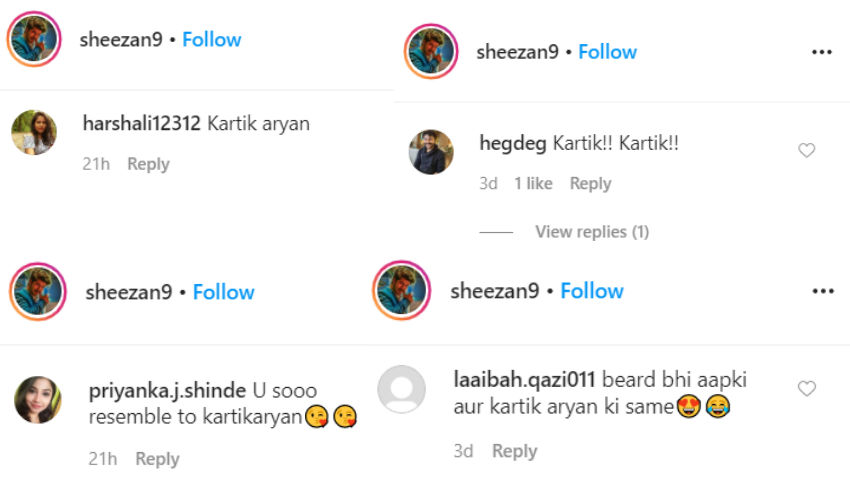 Kartik Aaryan also recently shared a picture of himself in his new bearded avatar. In this time of lockdown, the young star has not shaved his beard and has been seen interacting with his fans in his new look. Take a look at it here.

On the work front, Sheezan Mohd is working in a series called Nazar 2. In Nazar 2, he will be seen in the role of an adult who has the mind of a 5-year-old. Nazar 2 is aired late at night but has a good fan following and is loved by fans a lot. Before Nazar 2, Mohd was seen in Prithvi Vallabh, Jodhaa Akbar, Chandra Nandini, Sil Sila Pyaar Ka, Ek Thi Raani Ek Tha Ravan, and Tara from Satara. On the other hand, Kartik Aaryan was seen in Love Aaj Kal. Now he will be seen in films like Pilfer Singh, Dostana 2, Bhool Bhulaiyaa 2, and Chennai Express 2.

Read Also | Kartik Aaryan's 'Guest Iin London': Here Are Best Scenes That Will Entice You To Watch It