Kashmera Shah's photos in bikinis go viral on social media and recently, her husband Krushna Abhishek also posted a picture of her on his story. See it here.

Kashmera Shah is quite active on Instagram and frequently shares updates from her professional and personal life on social media. The actor rang in the new year with friends and actors Nisha Rawal and Karan Mehra with a cozy get-together. She posted pictures and videos from the bash and her husband could be seen getting involved in fun banter with Nisha Rawal as well.

Kashmera Shah's photos always take the internet by storm and her recent photo shoot in a bikini has gone viral as well. Her husband Krushna Abhishek shared a picture of her donning a red bikini on his Instagram story. Read on to know more about it and their New Year bash.

Kashmera Shah's photos wearing a red bikini, paired with a blue satin shirt went viral on Instagram as she shared the pictures and videos from a photoshoot on her social media handle. Her actor husband Krushna Abhishek took to his social media and shared Kashmera's bikini-clad picture on his story. He even wrote, "Hotness overloaded" in his Instagram story where Kashmera could be seen posing on a bed. You can see his story here. 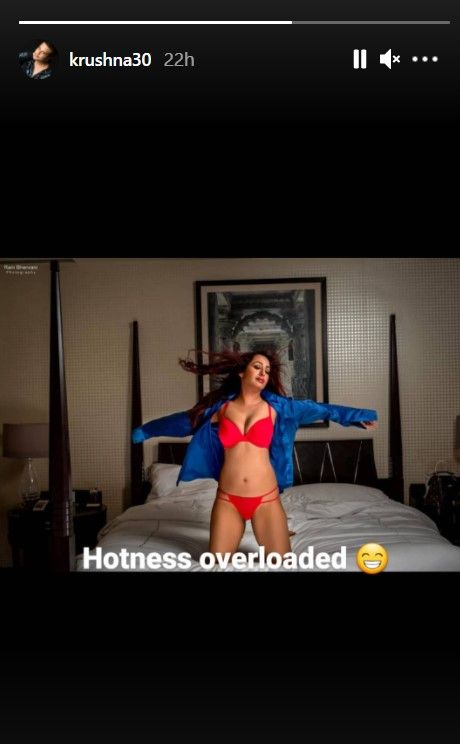 Kashmera Shah and Krushna Abhishek rang in New Years' together with close friends and actors Nisha Rawal and Karan Mehra. Shah took to Instagram and shared videos of Nisha and Krushna getting into a fun banter. Krushna could be seen passing a sarcastic comment on Nisha's hairstyle, saying that he really liked it. Further, we see Nisha stuffing Krushna's face with munchies to make him stop talking.

Coming to Kashmera Shah's Instagram, her feed features numerous pictures and videos of Krushna and their kids Rayaan and Krishaang. She also took to the social media site to post a video of herself, with Milind Gaba's song Main Itni Sundar Hu playing in the background to wish her fans and followers on the occasion of the New Year.

The majority of her posts are from photoshoots, where she can be seen wearing bikinis and monokinis. The actor has appeared in several Hindi and Marathi films over the years and has done numerous songs as well. Her films include Revati, My Bollywood Bride, Marne Bhi Do Yaaron, 9 Eleven, Murder, Janasheen among others. She has also acted in television shows like Siya Ke Ram, Fourplay, Nach Baliye, and Khatron Ke Khiladi.