Popular TV actor Kavita Kaushik took to her social media handle to call out and expose the abusive trolls while sharing a few screenshots of it on Tuesday.

Popular Indian actor Kavita Kaushik, on Tuesday, took to her Twitter handle and shared screenshots of online abuse directed at her while urging fans to call the trolls out and expose them. One of the screenshots featured a message that Kavita received in her Instagram Inbox in which one user had called her a 'bit**'. Meanwhile, the other screenshots featured the messages an alleged abuser sent her after she called them out. The messages in the screenshot read that the alleged abuser was actually a girl, adding that she comes from a poor family and was asking for forgiveness. 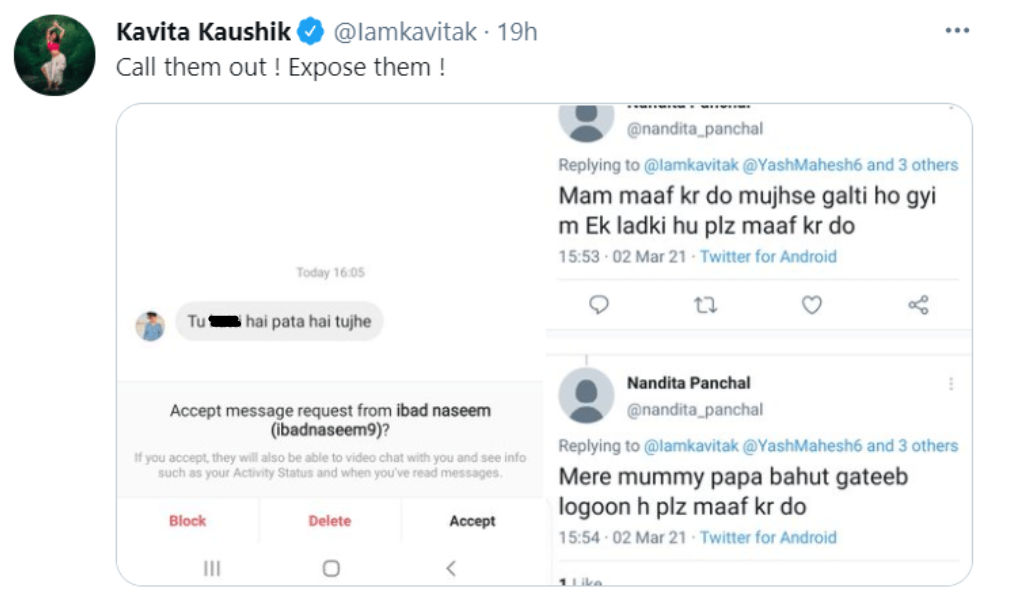 The 40-year-old actor stretched it further with a few more tweets, in which she also tagged Saharanpur Police. In a brief tweet, she requested the police to inform the parents of the 'kid', who was sending vile threats and abuses on social media to her. Meanwhile, when a Twitter user asked Kavita to calm down and forgive as the alleged abusers seemed like school-going kids, Kaushik came up with an explanation. She added that it's necessary to teach a lesson to the kid otherwise the kid can continue abusing others in the future.

@PanchalNandita @saharanpurpol just letting you know about this kid who is sending vile threats and abuses on social media to me and more celebrities , pls inform his parents ! Else I shall do a fir soon !

This is not the first time when the FIR actor has addressed the hate she receives online. Earlier, in October 2020, Kaushik had named an online harasser who was sending her inappropriate images. With a screenshot of the alleged harasser's Instagram profile, Kavita asserted that the man named Shankar was sending pictures of his private parts to celebrities during the holy time of Navratri. She also called him a threat to less privileged girls.

This man named 'shankar' is confidentally sending pics of his privates to celebs during this holy time, imagine what a threat he must be to less privileged girls, how is no one offended n bothers to find where he lives and yell slogans!?Saara zor aurton pe hi chalta hai kya? https://t.co/sQW81Rdv3T pic.twitter.com/slcLBNuDcW

Apart from clapping back at trolls, the Mindo Taseeldarni actor also gives a glimpse of her routine life via Twitter. The media feed of her Twitter handle is flooded with images and videos of her pet cat Jaggu. On the other hand, the actor has pinned a funny clip, featuring the star cast of her popular show FIR. In the pinned tweet, they can be seen performing a funny skit while reprising their characters.

READ | Kavita Kaushik Reveals The Reason She Likes Twitter, And It's Related To Milind Soman