Television actor Dheeraj Dhoopar, who is known for his stint on the show Kundali Bhagya, recently revealed to his fans that his Facebook and Instagram handle was hacked. Dheeraj Dhoopar also informed his fans that he was able to retrieve his account after filing a police complaint with the respective social media handles. Dheeraj's fans grew concerned when he released this sudden message. The Kundali Bhagya actor shared a statement on his Instagram story as well on his Twitter account about the same. 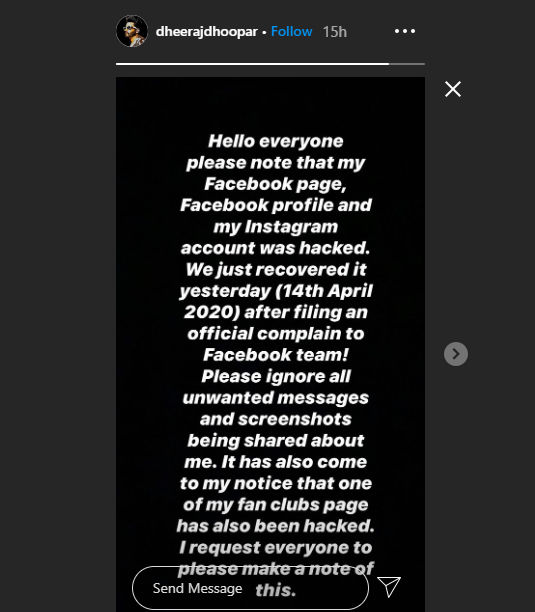 Dheeraj Dhoopar also shared about the same on his Twitter handle. The Kundali Bhagya actor's fans also got worried after hearing the news. Check out Dheeraj Dhoopar's tweet.

The Kundali Bhagya actor recently shared a goofy video on his social media handle. The video was captured by his wife Vinny Arora. Dheeraj can be seen breaking into sudden laughter while sipping onto his tea. Dheeraj's caption was also literally all of us when we cannot stop our laughter. Dheeraj captioned the post saying that his 'problem' is that he cannot stop laughing once he cracks up. The actor had all his fans swooning over his infectious laughter under the post. Check out Dheeraj's post.

PEOPLE HAVE PLEDGED SO FAR
LATEST NEWS
View all
38 mins ago
With ‘Succession’ shut down, Brian Cox takes on other roles
7 hours ago
Sumona Chakravarti's unmissable BTS posts from 'The Kapil Sharma Show'; Take a look
5 hours ago
Sumona Chakravarti of 'TKSS' fame has been part of THESE Bollywood movies
20 mins ago
Paras Chhabra on his equation with Mahira Sharma: 'Want everything to happen organically'
7 hours ago
'Naagin 4' actor Vijayendra Kumeria starts his YouTube channel; asks fans to show love