Kundali Bhagya stars Shraddha Arya and Dheeraj Dhoopar in lead roles. Arya recently shared a picture of the two dressed in an all-black ensembles on Instagram.

Zee TV's Kundali Bhagya has grabbed eyeballs ever since it aired in 2017. This romantic drama serial is the second part of the popular soap opera Kumkum Bhagya. Kundali Bhagya lead actors Shraddha Arya and Dheeraj Dhoopar's characters Preeta and Karan have also become the audiences favourite couple. Recently, Shraddha Arya took to Instagram to share a picture with co-star Dheeraj Dhoopar. In the picture, both of them were seen wearing black attires. She also added a quirky caption to the post. Read to know what Shraddha Arya said.

Shraddha Arya took to Instagram to share a slideshow of pictures with Dheeraj Dhoopar. In the pictures, she is seen wearing a  black saree and a pair of huge oxidised earrings. While Dheeraj is seen sporting a black leather jacket and a pair of black jeans. In the caption of the post, she expressed how much she and Dhoopar like n wearing black outfits. Arya wrote, 'Us showing up at a Party in all Black for the 674839th time. If it’s not Black just keep it back!'

Thus post by Shraddha Arya garnered over 189K likes within two hours of uploading and is still counting. Many fans and followers have commented on the post as well to appreciate the actors' look. Several of her fans commented using the red heart and fire emojis to express their admiration. See their reactions here: 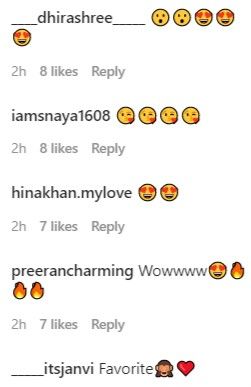 Shraddha has worked in several Tamil, Telugu and Kannada language films. She made her acting debut with the Tamil film Kalvanin Kadhali in 2006. On the smaller screen, she has starred in Main Lakshmi Tere Aangan Ki, Tumhari Paakhi and Dream Girl. She has also featured in several music videos as well. One of her most popular songs are Viah Nai Karunga which also features Dheeraj Dhoopar. It has 41 million views on YouTube. She recently also shared the poster of her upcoming Punjabi song Guilty.