Ministry Of Defence Writes To CBFC, Orders Producers To Get A NOC To Portray Army Themes

However, the latest development regarding the same has come to light. The Ministry of Defence has now written to the Central Board Of Film Certification. In that, the ministry has asked producers to take an NOC (no objection certificate) before telecasting content that has themes around the Army.

It has been brought to the notice of this Ministry that some production houses making films on Army theme are using contents which are distorting the image of Indian Army. Therefore, the producers of movies/web series etc based on Army theme may be adviced to obtain the ‘NOC’ from Ministry of Defence before the telecast of any movie/ documentary on Army theme in public domain. They may also be advised to ensure that any incident which distorts the image of Defence Forces or hurts their sentiments may be prevented. 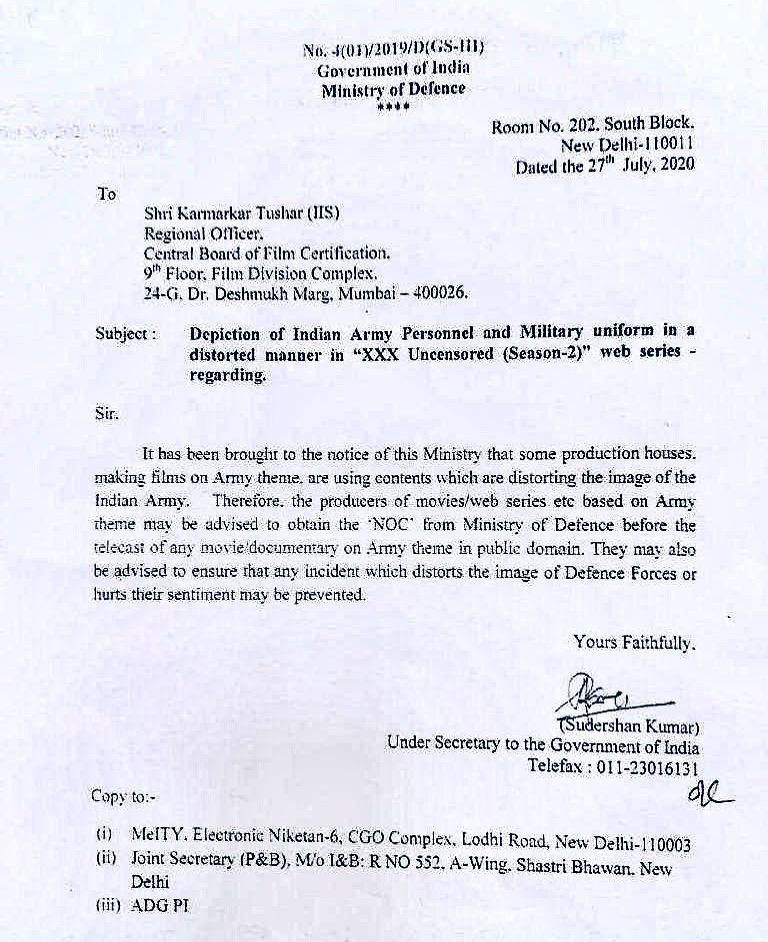 @DefenceMinIndia writes to the Censor Board saying Production Houses making films or Web series based on 'Army theme' should obtain NoC from the Ministry.#CBFC @GoI_MeitY @adgpi @rajnathsingh pic.twitter.com/M6ogiiwe9d

The CBFC function under the Information and Broadcasting Ministry does not have a say in the content being shown on OTT platforms. The CBFC’s role is restricted to films and television satellite channels. In fact, content posted on OTT platforms is not regulated by any specific body. The platforms are still in the process of finalising a self-regulatory code for the content they stream.

WE RECOMMEND
2 weeks ago
PIL filed in Delhi HC over encroachment of land under Defence Ministry
3 weeks ago
UPSC Recruitment 2020: Over 80 posts for aspirants in the commission; read
1 year ago
Bengaluru to host Aero India 2019, Lucknow loses out
1 week ago
UK to boost its defence for 'persistent global engagement' amid threats from Russia, China
6 days ago
Israeli delegation enroute India with 4 cutting-edge Covid solutions; will test them out
LATEST NEWS
View all
1 day ago
Salim-Sulaiman to be Kapil Sharma's next guests on 'TKSS' after Sonu Sood
1 day ago
'Kumkum Bhagya' Written Update July 31, 2020: Prachi helps Rahul propose to Maya
1 day ago
'Swamini' Written Update for July 31: Ramabai finally meets the baby