Neha Dhupia recently made headlines commenting about cheating in a relationship. Now a meme page has leaked her chat. Read on to know more about Neha's chat

Neha Dhupia, who is currently one of the gang leaders on Roadies Revolution recently made headlines with her comments on violence in a relationship. In one of the recent episodes, Neha Dhupia was seen losing her cool when a male contestant revealed that he slapped his ex-girlfriend as she was cheating on him with multiple partners. Neha Dhupia was seen getting angry stating that in no capacity he has the right to slap her.

In the video that surfaced online, Neha Dhupia could be heard as she claimed that it was the girl’s choice to be with multiple partners. This statement trended on the internet in the form of memes. In fact, one such meme page has revealed their chat with Neha Dhupia where she asks them to stop posting memes. However, it has not been officially confirmed by Neha that the chats are legitimate.

Have a look at Neha Dhupia's video here:

Have a look at the chat revealed by the meme page here: 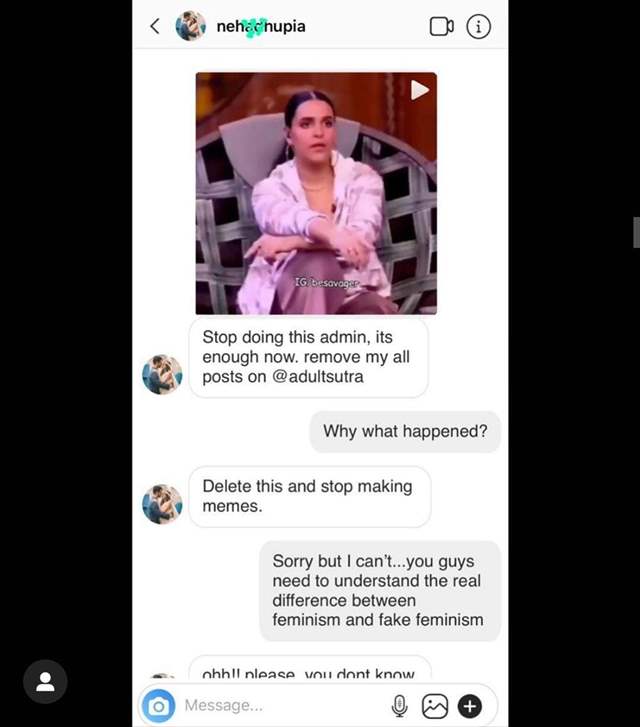 Have a look at some of Neha Dhupia memes shared by netizens here:

If a person is dating someone and he/she dates other people at same time thn he/she is 100% characterless .Here I said it. #NehaDhupia

#hypocritenehadhupia
Hypocricy at its best,splash some water on face aunty ji, @NehaDhupia
People like you are really mocking the serious/prestigious issue of #feminism #shameonyou #shameroadies #antisocialist

Shame on people like @NehaDhupia, who show such double faces on equality !! https://t.co/z6XWMOFHIj