On October 13, Niti Taylor took to her social media handle to reveal that she has inked her husband's first name to make their second month wedding anniversary.

On October 13, popular TV actor Niti Taylor took to her social media handle and shared a couple of photos along with a video, to give a sneak peek into her second month wedding anniversary. Interestingly, Niti Taylor inked husband Parikshit Bawa's first name on her ring finger. In the caption of her post, she asserted that it was her dream to get her husband's name tattooed on her ring finger and she has finally managed to do it.

The brief caption of Niti Taylor's post read, "Lease Swipe Right For the longest time, it was my dream, that the day I got married I want to get a tattoo of my husband’s name on my ring finger. I have fulfilled my wish". She further added, "It was a very long name and small fingers, but managed / This is my Second Monthly Anniversary gift to my better half / And yes the cute little cake / To many more celebrations". Scroll down to take a look at Niti Taylor's slideshow post.

Please Swipe Right ðŸ‘‰ðŸ» For the longest time, it was my dream, that the day I got married I want to get a tattoo of my husband’s name on my ring finger. I have fulfilled my wishðŸ¤©ðŸ¥°â¤ï¸ It was a very long name and small fingers, but managedâ¤ï¸ This is my Second Monthly Anniversary gift to my better halfðŸ¥° And yes the cute little cake ðŸ¥³ðŸ¥³ To many more celebrationsðŸ» #happyanniversary#partitayles

Within a couple of hours, the post managed to garner more than 259k double-taps on the photo-sharing platform; and is still counting. On the other side, Niti's friends and peers from the TV industry, such as Vidhi Pandya, Shubh Mukherjee and Kishwer Merchantt, are a few to name, who were quick to shower love in the comments section. Meanwhile, many from Taylor's 2M Instagram followers flooded the comments box with red-heart emoticons. A fan wrote, "Happy 2 months marriage anniversary" while another asserted, "The tattoo is soo cutee". 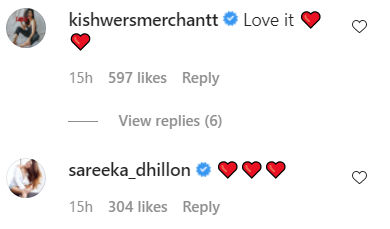 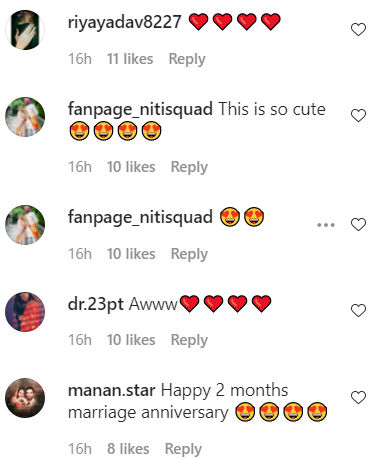 Interestingly, earlier this month, Niti shared a short video on her social media feed to announce that she has tied the knot with fiance Parikshit Bawa in August. In a brief caption, the 25-year-old actor asserted that she has completed her journey from "Miss to Mrs". While naming it a Covid wedding, she further shared that they had a very small, quiet and intimate wedding with just their parents. She concluded the caption and added, "Also, I'm announcing this late because we were hoping that the Covid-19 pandemic would die down sooner and we could celebrate in a big way - but hoping for a better 2021".

READ | Niti Taylor To Join The Cast As Lead In Balaji Telefilms’ Next Show? Know More