Actress and dancer Nora Fatehi who is known to impress fans with her impeccable dance moves, recently let her feelings out in a cryptic post on social media.

Actress and dancer Nora Fatehi who is known to impress fans with her impeccable dance moves, recently let her feelings out in a cryptic post on social media. The Garmi dancer took to her Instagram stories and shared a post about ‘repentance’ and ‘revenge’. She even promised in the post that vengeance will be served no matter what.

She captioned the post and wrote, “I'm not real big on Repentance... I like Revenge better.. And trust me... It will Be Served,” along with a devil emoji, leaving her followers puzzled. Apart from the post, she offered no details about its context. Nora has carved a niche for herself exclusively in dance-based movies and shows with her exceptional dance moves.

Earlier, she made an appearance on Kareena Kapoor Khan’s radio show 'What Women Want'. During the show, the host raved about the former's dance moves in numerous hit songs. Apart from that, Nora Fatehi also went on to share her worst experience in Bollywood and how she handled it.

Read: Nora Fatehi Opens Up About Her Childhood And Learning Dance From Variety And Diversity 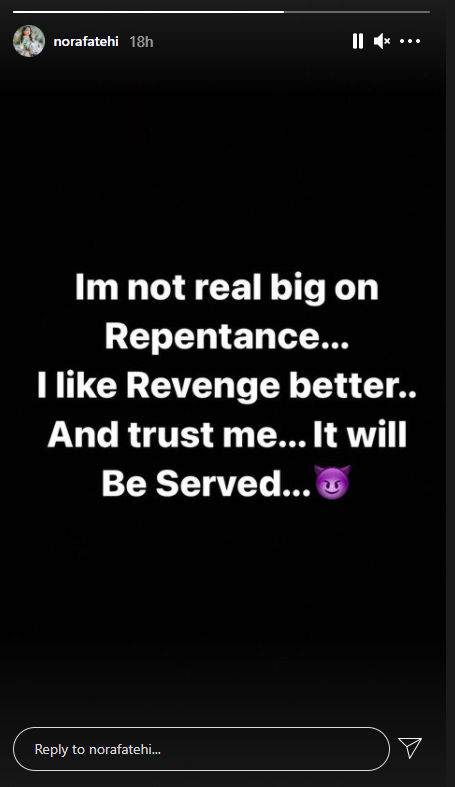 During the interview, Kareena asks Nora about her worst experience in the film industry and how she managed to handle it. Replying to Kareena’s question, Nora said that "it must be the stereotyping". She added, "it is very complicated to maneuver because I had many people who tried to get me into a film or song or even convince filmmakers to trust my skills". However, she revealed that it never happened until she spoke up for herself. She also added that once you get on set, one must convince them with their skill.

Nora Fatehi on the work front

Meanwhile, on the work front, Nora Fatehi was last featured in the single Naach Meri Rani alongside Guru Randhawa. Released two months ago, the track has already crossed over 300 million views on YouTube. She was seen in the movie Street Dancer 3D, where her dance moves had become a talking point. Nora will next be seen in the movie Bhuj: The Pride of India, for which she recently shot alongside Sanjay Dutt. The movie also stars Ajay Devgn, Sonakshi Sinha, among others. Nora is also popular for her own dance videos and covers of popular hit songs, the latest being of Body.

Read: Nora Fatehi Spills The Beans On Her Worst Experience In The Film Industry | Read