Parth Samthaan Shares Pic With Khushali Kumar, Says 'there's Something I Want To Tell You'

Actor Parth Samthaan recently kept his fans on his toes after he shared a scintillating picture with bussing talent Khushali Kumar on Instagram.

Actor Parth Samthaan recently kept his fans on his toes after he shared a scintillating picture with bussing talent Khushali Kumar on Instagram. What caught the attention of the fans was his caption which has lefts his fans in a dilemma. In the picture, the actor can be seen looking handsome in breezy blue formals with Khushali leaning on him. The caption has left his fans wondering whether he is confessing about his relationship or his new music video.

While captioning the post, he wrote, “There's something I want to tell you, yes it's her.” Several fans of the actor could not control their excitement and asked Parth about the hidden secret behind the picture. One of the users wrote, “IT'S HER WHATTT!!!! please say it's all about the music video.” Another user wrote, “I hope it's his video song, not his gf.” A third user chimed in excitedly and wrote, “Yes it's her means ?” Another echoed similar sentiments and commented, “Okayyyyyyy I’m excited for this one.” The post has left his fans speculating about the two actors. Several behind-the-scenes photos and videos of Parth had surfaced on social media in October last year, wherein he was seen getting ready for his shots. His beach look also got a thumbs-up from fans. There were even some videos of the star where he can be seen getting a touch-up of his make up by his make up artist on the set. He looked stylish in a beachy orange floral button-up shirt paired with black denim pants. The actor looked charming and confident as he stood on the beach, surrounded by dancers, waiting to take a shot for the scene. There were even videos of Parth and Khushali bonding well on the sets of video. 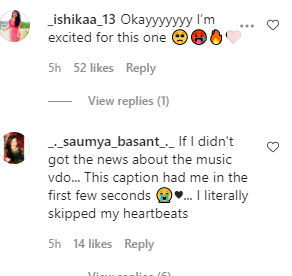 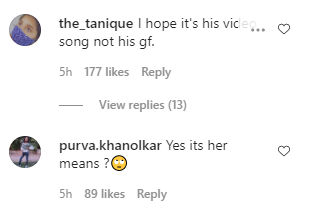 Meanwhile, on the work front, Parth Samthaan began shooting for his upcoming web series, Hero.  It was in July 2020, when Ekta Kapoor had announced that the filming of Parth Samthaan's digital debut project, Main Hero Boll Raha Hu had begun. In this show, Parth will be seen in an all-new avatar. He will play the role of a gangster.

Apart from this, Parth was last seen in the daily soap, Kasautii Zindagii Kay, alongside an ensemble cast of Erica Fernandes, Sahil Anand, Pooja Banerjee, Aamna Sharif, Shubhaavi Choksey, Akash Jagga, and others. The show entails the story of two love birds who fight every battle to be together. KZK went off the air this year.