Television actor Parth Samthaan’s housing society has filed an official complaint against the actor for not following COVID-19 guidelines. Read on.

Kasautii Zindagii Kay actor Parth Samthaan had tested positive for COVID-19 earlier this month. He was under quarantine for two weeks before being tested negative for the virus. In a recent development, Parth Samthaan’s residential building society has filed a formal police complaint against the actor for violating the rules while in quarantine.

Television actor Parth Samthaan was recently accused by a resident for not following BMC given guidelines. In the post on social media, the resident also accused the actor of moving out of his house that was sealed. Recently, the members of the housing society where Parth Samthaan resides have lodged a formal complaint against the actor.

Rajiv Ranjan, a user on social media, shared a copy of the formal complaint on Twitter. According to the complaint, it was filed the same day the actor was accused of violating BMC guidelines. The complaint has been lodged anticipating “strong action” against Parth Samthaan.

The letter explained how Samthaan and his house help were tested positive for COVID-19 and were quarantined inside their homes. Furthermore, it was also revealed that Parth Samthaan’s 28th floor was sealed and movement was restricted. The letter further added Parth Samthaan was tested negative for COVID on July 21, 2020. However, his house help’s report came positive once again.

Further, the letter read, “In spite of all the instructions and barricading Parth moved out from the containment zone in the evening of July 27. He further took the elevator and went down putting other residents' lives in danger. He was stopped by the neighbour but didn't heed any attention. Then he came back on July 28 morning at 6 am and again went out 9:30 am. We would request to take strict action against him”.

Take a look at the complaint letter here: 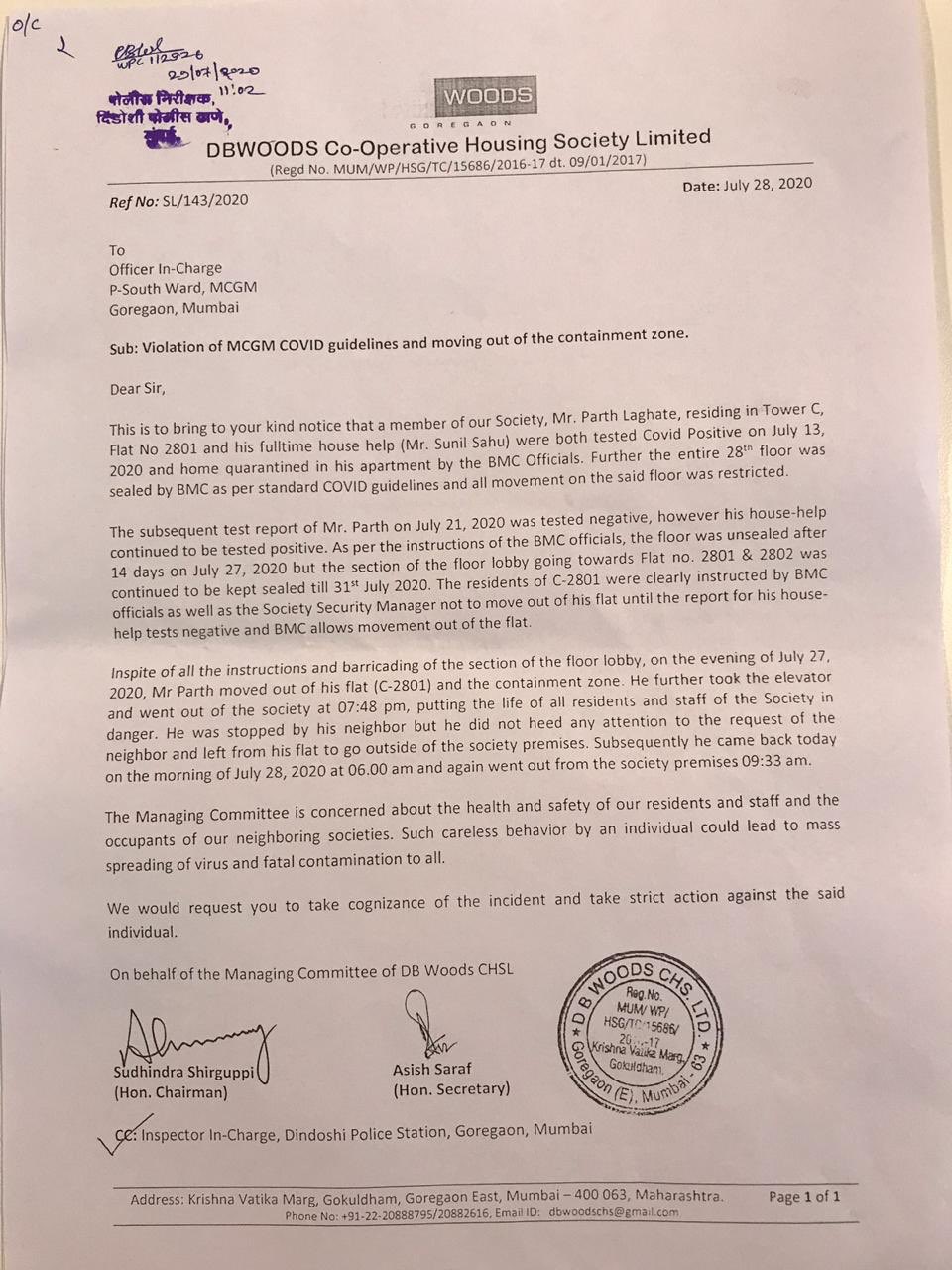 After recovering from COVID-19, Parth Samthaan had gone to Pune to be with his family. If recent reports are to be believed, then the actor will be resuming shooting for Kasautii Zindagii Kay soon. However, any confirmation on the same has not yet been given by neither the actor nor the makers of the show.

ALSO READ | Parth Samthaan Opens Up About 'moments Of Depression'; Arjun Bijlani Comes Out In Support