Priyank Sharma and Benafsha Soonawalla who were seen together in Bigg Boss 11 have finally confirmed that they are dating, 2 years after the show ended. Read.

Priyanka Sharma took to his Instagram account and shared a picture of himself kissing Benafsha Soonawalla on her cheeks. While Priyank Sharma captioned the picture with a simple ‘confirmation’. Benafsha Soonawalla also shared the same picture on her Instagram account. She captioned the picture with an adorable post verse that read, ‘Can’t nobody keep me like you. Call it unconventional. My love is habitual’.

Friends of the former Bigg Boss contestants commented on the post. While many congratulated the couple, Hina Khan’s beau Rocky J commented a simple ‘finally’ on Priyank Sharma’s post. Hina Khan and Priyank Sharma shared an incredible bind while inside the Bigg Boss house. Their friendship was liked by many and even after they got out of the show, they have managed to stay friends. 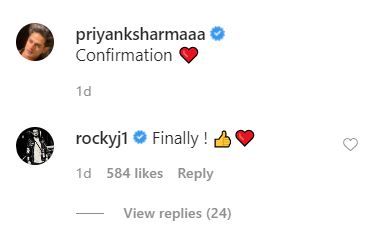 PEOPLE HAVE PLEDGED SO FAR
LATEST NEWS
View all
5 hours ago
'Bigg Boss 13' fame Asim Riaz shares a selfie with a cryptic message; fans are worried
8 hours ago
Shehnaaz Gill flaunts her ‘Sacha Pyar’ on Snapchat and it is not Sidharth Shukla
10 hours ago
Sumona Chakravarti of 'TKSS' fame has been part of THESE Bollywood movies
5 hours ago
Paras Chhabra on his equation with Mahira Sharma: 'Want everything to happen organically'
6 hours ago
Sargun Mehta lost her perfect abs during lockdown & here are the culprits, details inside