After divorce rumours about Rajeev Sen and Charu Asopa surfaced online, the 'Iti' actor shared a happy picture with his wife. See his Instagram post here.

After Rajeev Sen deleted his wedding pictures from social media platforms, speculations were rife that his marriage with television actor Charu Asopa had hit rock bottom. Many rumours have prevailed on the internet about their separation over the past few weeks. However, Rajeev Sen recently shared a picture of the duo on his Instagram which has taken everyone by surprise and rubbished the rumours regarding their separation.

In the post shared by the actor, the pictures appear to be clicked at one of the wedding festivities. Although he didn’t add a caption, the post hinted that the duo has worked on their differences. While Rajeev can be seen donning an orange Kurta which is paired with white trousers, Charu Asopa has sported a white and golden lehenga. The duo is holding each other’s hands, as Charu smiles.

The couple tied the knots back in 2019, but amid the on-going Coronavirus lockdown, Rajeev deleted their pictures from his Instagram handle. Several reports claiming that the duo is staying separately surfaced on the internet. Not only that but the bitterness of their relationship was also expressed by the couple in their recent media interactions. While Rajeev said that someone has “brainwashed” Charu’s mind. On the other hand, Charu claimed that “she is mature enough to make her own decisions”.

But after looking at Rajeev’s recent post, their fans couldn’t help themselves from praising the duo. While some were seen saying that they “loved the pictures”, others asked them to “stay together”. Take a look at how their fans are reacting here: 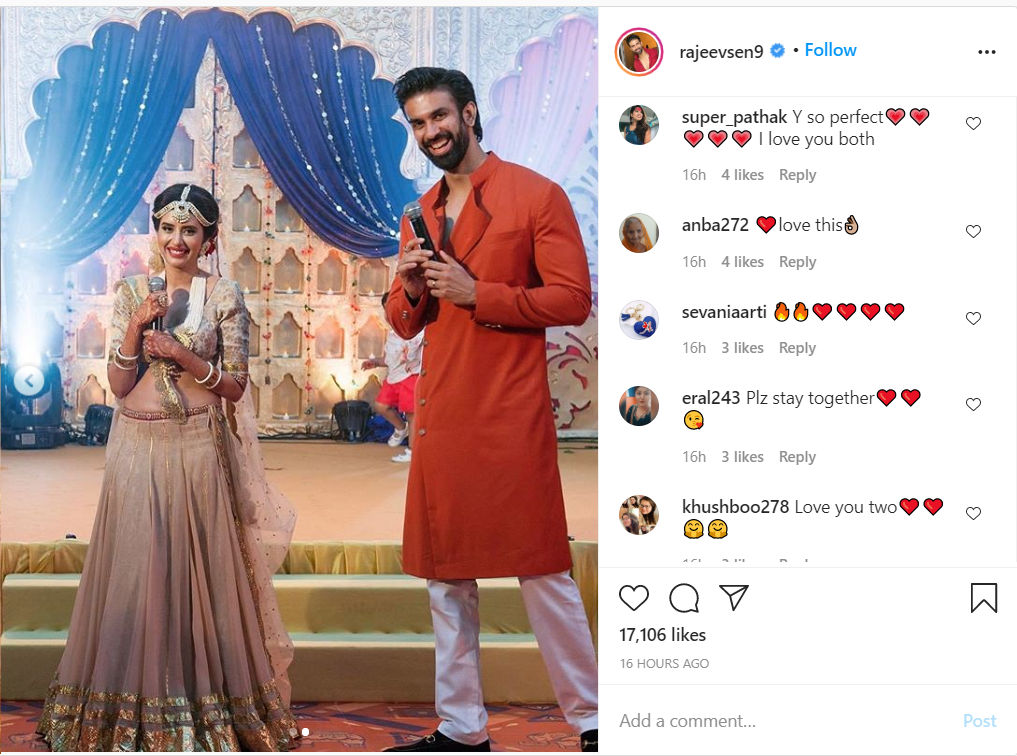 ALSO READ| Bigg Boss 14: Rajeev Sen Makes It 'loud And Clear' That He Will Not Be A Part Of The Show

Meanwhile, on the professional end, Rajeev recently shared the first look poster of his debut movie Iti. The poster features his shadow, sitting in a blue car, while the tagline of the film “Can you solve your own murder” appears to be written in a transparent text. He shared the first look poster of Iti writing that life is all about first impressions. Everyone only gets one shot at it and they should make it everlasting. Have a look at it here: