Ramayan's Ram Arun Govil took to his Instagram handle and shared a picture in which his team wished the actor on his 63rd birthday. Have a look at the picture

On January 12, 2021, Ramayan's Ram i.e Arun Govil took to his Instagram handle and shared a picture created by his team wishing him on his 63rd birthday. The language used in the picture he shared is Hindi and it wishes the actor a "happy birthday". As soon as the actor uploaded the picture, his fans showered love and blessings in the comments section.

A fan commented, “Jai Ramji ki. Happy Birthday Arunji”. Another one wrote, “You are a truly deserving person, I wish you the double of the best of everything. Your heart is just as big and special as your talent, be as you are a kind, humble, and generous person. You are a true actor not just from your work and performance but from your ethics. Keep growing sir. Keep Inspiring”. A user simply wished him ‘happy birthday’ in his comment. Many other fans dropped several red hearts.

Also read: If You Loved Ramanand Sagar's 'Ramayan', Here Are His Other Works You Must Check Out 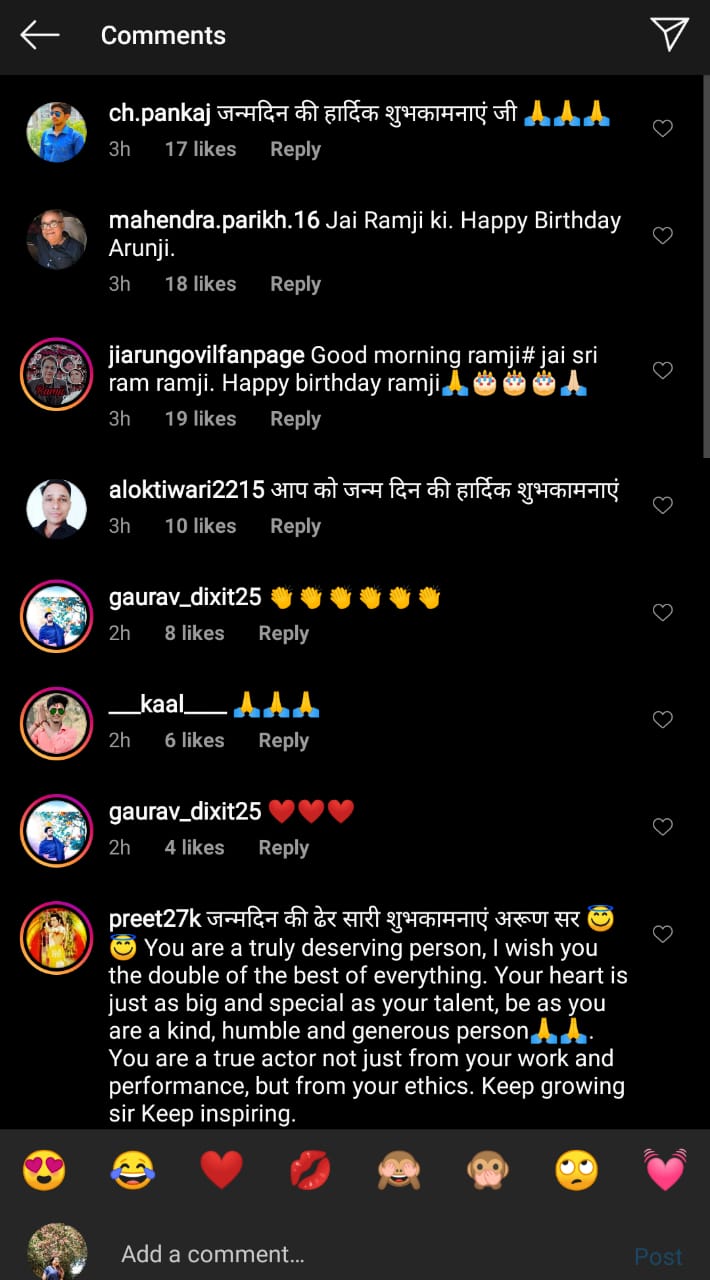 On the same day, Arun also posted a picture sent to him by his fan. The language for the words in the picture is Hindi and the fan has sent his wishes to the veteran actor. In the caption, he simply wrote, “sent by a fan”. Fans flooded the comments section with positivity as they wished him on his birthday. A fan commented, “Jai siya ram” while another one wrote, “Blessings from Shri Ram”. A netizen wished him, “Happy birthday dear Arun Govil sir ramji” with several praying hands and kissing face emoticons. Another one wrote, “We love uuuuu always” with a red heart and praying face emoticon.

Also read: Arun Govil Reveals His Filmy Career Was Over After Essaying Lord Ram In 'Ramayan'

Arun Govil predominantly appeared in Hindi, Bhojpuri, Braj Bhasha, Odia, and Telugu cinema. He is popular for essaying Lord Rama in Ramanand Sagar’s Ramayan. He has been featured in Prashanta Nanda’s Paheli, Kanak Mishra’s Sawan Ko Aane Do, Satyen Bose’s Saanch Ko Aanch Nahin. The actor made his television debut with Ramanand Sagar’s Vikram Aur Betaal. For his character in Ramayan, Arun has won the Uptron Award in the Best Actor in the year 1988. The actor has reprised his role as Rama in Sagar’s Luv Kush.