'Hitler Didi' actor Rati Pandey has recently been roped in as new lead for 'Shaadi Mubarak'. She recently thanked her co-star through her Instagram.

Rati Pandey was recently finalised for the role of Preeti Jindal in the recent drama series Shaadi Mubarak. As she embarked upon her journey in the new role, she made a sweet gesture of thanking her co-star from the show by posting a sweet message on her social media. Take a look at how Rati Pandey thanked her co-star Manav Gohil in her latest Instagram post.

Rati Pandey took to her Instagram handle and wrote a beautiful message for Manav Gohil along with a picture of them together. In the caption, she addressed Manav Gohil as a rockstar and stated how he is a man of perfection with perfect timing and sense of humour. She also added how he is a prankster and a thorough gentleman. Rati Pandey also expressed herself by saying how working with him was a pleasure for her and thanked him for making her so comfortable. She ended the caption by stating how Manav Gohil is the cutest.

The moment she shared this post, all their fans took to the comment section and reacted to the post. Some of them complimented them on how good their chemistry is in the show while many others mentioned how they have been loving Rati as Preeti Jindal in Shaadi Mubarak. Here’s how the fans reacted to Rati Pandey’s Instagram post. 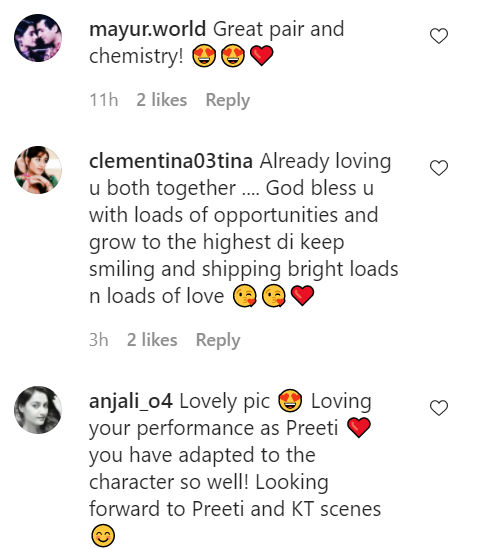 All about ‘Shaadi Mubarak’

It is a TV drama that premiered in August this year. Featuring Rati Pandey and Manav Gohil in the lead, the story is about two people who are planning to begin a marriage bureau. Earlier, Rajshree Thakur was essaying the lead role opposite Manav but after being a part of the show for around 2 months, she got replaced by Rati. Apart from Rati and Manav, other cast members of the show include Rajeshwari Sachdev, Anjali Gupta, Gaurav Sharma, Akanksha Sareen, Sandeep Mehta, Dolly Minhas, Manu Malik, Shefali Singh Soni, Priyamvada Singh, Achherr Bhaardwaj and a few others. Also, actors like Neelu Vaghela and Yashodhan Bal have made a special appearance on the show.